The Navy Is Adding Robotic Warships to Its Deadly Arsenal 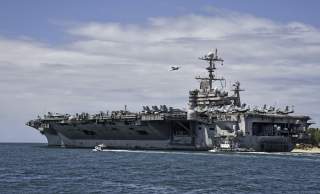 It's official. The U.S. Navy as part of the 2020 budget request is asking Congress to fund the fleet's first robotic warships.

The Navy between 2020 and 2024 wants to spend around $4 billion buying 10 large unmanned surface vessels and nine unmanned submarines.

The Navy wants $206 billion in 2020, an increase of $9.5 billion over the service's 2019 budget. "The increased funding is beginning to reverse the erosion of our military advantage and we are on a better trajectory to restore that competitive advantage," the Navy stated. "This budget is strategy-driven and balanced to maximize our naval power. The budget fields a formidable force in all domains of naval operations."

The $206 billion includes $61 billion for weapons-procurement, a reduction of $400 million compared to 2019. The 2020 proposal includes $20 billion for research and development, a $2-billion boost compared to the previous year. Portions of the future robotic fleet fall under each account.

In all under the budget proposal, the Navy would buy 55 large manned warships through 2024. The sailing branch also would acquire 10 large drone ships and nine drone submarines. In other words, robotic ships would account for a quarter of shipbuilding starts over the five-year period.

The Navy is asking Congress for $2.7 billion to buy 10 large unmanned surface vessels, or LUSVs. The robot spending spree would begin with $370 million in 2020, "leading to the transition of USV prototypes and associated payloads from [research and development] to procurement beginning in [fiscal year] 2021." There's also a smaller account for a "medium" USV.

The large robot ship "will serve as both a sensor and a shooter" U.S. Navy Rear Adm. Randy Critestold reporters on March 12, 2019. The drone ships will be "smaller [and] more attritable than conventional ships, in addition to being more affordable."

"The Navy is still developing its requirements for these vessels and concepts of operation for it how might employ them, but has described the notional LUSVs as longer than 164 feet in the past," The War Zone reporter Joseph Trevithick explained.

"Rear Admiral Crites would not say that there is firm, validated requirement for the drones ships, but did say that the Navy was presently working with a concept revolving around a hullform closer to 200 to 300 feet long with a displacement of around 2,000 tons. This would place the drone vessels in the same general size class as manned corvettes."

The Navy reportedly plans to use its new FFG(X) missile frigate as a command vessel for robotic flotillas. The 2020 budget asks for $1.3 billion for the first of 20 of the frigates.

The sailing branch hasn't yet tapped a contractor to build the drone surface ships. But it already has chosen a builder for its robotic submarines. The Navy in 2020 wants to spend $360 million on unmanned undersea vehicles. $180 million would pay for two of Boeing's Orca robot subs.

The 51-foot-long Orca autonomously can sail as far as 6,500 nautical miles. "Eventually, the Navy could also use the Orca ... for mine countermeasures, anti-submarine warfare, anti-surface warfare, electronic warfare and strike missions, according to a Navy outline of the system’s capability development," reporter Ben Werner explained at USNI News.

If Congress funds the 19 drone warships, the new unmanned vessels could help to fill the force-structure gaps resulting from the Navy's proposal to cut one aircraft carrier in the mid-2020s and also delay past 2024 the construction of new amphibious ships.

The Navy's goal is to grow the fleet from 287 front-line ships in 2019 to 350 in the 2030s. The carrier cut and amphib deferments undermine the expansion.

"In terms of capacity, this budget provides for a larger overall force," the Navy stated in its 2020 budget proposal. "We deliver more people and platforms, as well as enablers that make the force whole. We deliver a better and more innovative force through investments that improve our legacy platforms and provide for a more robust and lethal mix of next-generation opportunities."

Robot ship arguably are the key "next-generation opportunity" as the Navy struggles to expand while also evolving to counter the Russian and Chinese fleets.