The U.S. Navy's New Missile Frigates Might Be Revolutionary Thanks to 1 Amazing Feature 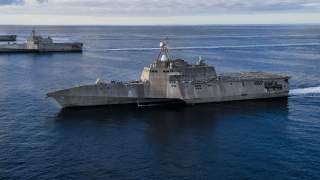 That's the what San LaGrone, a reporter for USNI News, concluded after reviewing the Navy's March 2019 request for proposals to the U.S. shipbuilding industry for the frigate design.

The new FFG(X) frigates must support a wide range of radio datalinks including Link 11, Link 16, satellite communications and the Network Tactical Common Data Link, the Navy explained in its RFP.

"The inclusion of the high-bandwidth datalinks on FFG(X) hint at an important role for the class to provide command and control and targeting information to the Navy’s emerging family of unmanned surface vehicles," LaGrone wrote.

The Navy originally conceived of the FFG(X) frigate as a small, inexpensive warship with modest combat capabilities that would complement the fleet's bigger, pricier and more sophisticated destroyers and cruisers.

But in the five years since the sailing branch decided it needed a new frigate, the FFG(X) has grown in sophistication. The warship the Navy projects it will start building in 2020 could feature many of the same weapons and sensors as bigger ships. And it could have extra space and power for future upgrades.

The sea service expects to spend $1.2 billion on the first FFG(X) and no more than $950 million apiece for the next 19 vessels in the class. By comparison, an LCS in 2018 cost around $650 million minus its plug-and-play weapons.

An FFG(X) could be around 400 feet long and displace around 5,000 tons, depending on the design the Navy selects, making it roughly half as big, in terms of displacement, as an Arleigh Burke-class destroyer.

The Navy wants to buy 20 frigates between 2020 and 2030. The vessels would replace at least 20 of the Littoral Combat Ships that the sea service previously planned to acquire. The LCS has come under fire for being too lightly-armed for independent patrols in contested waters.

To LaGrone, that's a strong hint that the vessel eventually could lead formations of unmanned warships that could carry weapons and sensors to extend the sensing and striking ranges of the manned fleet.

"In the summary of the draft RFP, the Navy sets out a vision for the new class that cast the FFG(X)s in a role as a major sensor node in an emerging integrated Navy tactical battle network," LaGrone explained.

Cheaper to build than today ships and expendable, unmanned vessels could help the Navy quickly to grow -- and could allow the fleet to develop new tactics for battling a high-tech foe.

The Navy has done "a lot of work ... over the last six or seven months" preparing to formalize programs for large, remotely-operated vessels, Rear Adm. William Galinis, the Navy's executive for surface ships, told the Surface Navy Association in January 2019.

The programs could cover at least two classes of oceangoing, robotic warships.

One is a medium-size unmanned surface vessel around the size of the Defense Advanced Research Agency's 132-feet-long experimental Sea Hunter robot ship. The medium USVs "will act as scouts and decoys, carrying sensors and jammers," Breaking Defense reported.

"If their radio and radar emissions draw enemy fire, well, they were relatively cheap and there’s nobody aboard to get killed," the publication quipped.

The Navy wants to award a contract by 2023 for a large USV, Rear Adm. John Neagley, the Navy’s executive for unmanned and small warships, told Sydney J. Freedberg, Jr. at Breaking Defense. The robotic vessels could allow the Navy to grow even as it cuts back on the acquisition of traditional, manned ships.

But turning the idea of a bigger fleet into an actual bigger fleet has proved difficult. Manufacturing and maintaining extra new ships could cost as much as $23 billion a year, according to the Congressional Research Service. For years, the Navy’s annual shipbuilding budget has been around $15 billion.

One Congressional shipbuilding expert told The National Interest on condition of anonymity that quickly growing the Navy by 75 ships simply by buying new vessels "would be impossible."

Adm. John Richardson, the chief of naval operations, in a February 2019 conversation with reporters signalled lower expectations regarding fleet size.

Robotic ships could help to solve the growth problem. "Part of the value of having unmanned surface vehicles is you can get capacity at a lower cost," Neagley said. An operational version of Sea Hunter could cost just $20 million, Freedberg reported.

While highly autonomous, drone ships could require human beings to direct their operations and authorize the drones to fire weapons.

"If artificial intelligence can replace humans on the most vulnerable vessels, and robust networks can link manned and unmanned ships into a single coherent force – without succumbing to hacking or jamming – maybe you can get the best of both worlds," Freedberg wrote.

"The manned ships will bring both the tactical adaptability of the human brain – still unmatched by any computer – and sensors and weapons systems too big to fit on the robotic craft, like high-powered radars and railguns."