China’s Intrusions on Taiwan's Airspace Show No Signs of Stopping 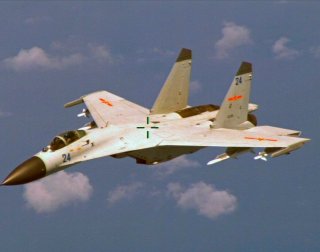 Taiwan’s Defense Ministry claimed on Monday that more than fifty Chinese aircraft had entered its air defense identification zone (ADIZ), the largest number since it began tracking the incidents in 2020.

The planes had flown over the southwest corner of Taiwan’s ADIZ; after their entry, Taiwanese air force crews ordered them via radio to “turn around and leave immediately.”

Prior to Monday’s incursions, the single-day record had been set on Saturday, October 2, with thirty-nine planes overhead; that day’s flights had broken a record set the previous day, on Friday, with thirty-eight intruding aircraft. Since the beginning of October, nearly 150 aircraft have intruded into the Taiwanese ADIZ.

A country’s “air defense identification zone” is broadly a set area outside its airspace over which it demands some knowledge of incoming aircraft. While the designation of ADIZ does not exist in international law, it is understood by the U.S. Federal Aviation Administration as “a designated area of airspace over land or water within which a country requires the immediate and positive identification, location and air traffic control of aircraft in the interest of the country's national security.”

Taiwan’s actual airspace is understood to begin twelve miles off its coast, a negligible distance for an aircraft to traverse.

The U.S. Department of State voiced its concern over the intruding flights on Monday, with spokesman Ned Price suggesting that they “risk miscalculations and undermine regional peace and stability.” In response, China’s Ministry of Foreign Affairs condemned Price’s remarks, arguing that they “seriously undermined the One-China Principle”—the principle, still the official position of the United States, that Taiwan is not an independent country.

The Chinese state-owned Global Times newspaper suggested that the intruding flights were part of a series of Chinese military drills taking place on the mainland opposite Taiwan. It also noted the presence nearby of the USS Ronald Reagan and the USS Carl Vinson, two U.S. aircraft carriers.