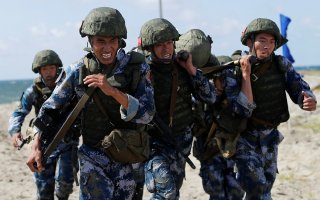 Since its foundation in 1949, the People’s Republic of China has claimed that it has a right to Taiwanese land. At long last, it appears to be turning its words into actions—but not in the way that one might expect.

Nikkei Asia reported that residents of Matsu, a chain of Taiwanese islands only 5.5 miles off the mainland’s coast, claim they have seen hundreds of Chinese sand dredgers stealing sand from the island’s coasts.

In an interview with Nikkei, Taiwanese politician Lii Wen described the use of sand dredgers as fitting within a legal “gray zone”—not definitively illegal, but not legal, either. According to Lii, the dredgers’ use was not a declaration of war, but an attempt to harass the island’s residents. By most accounts, the attempt seems to be succeeding on Matsu, irritating the villagers and damaging the beaches.

According to the Japan Times, the Taiwanese Coast Guard was mobilized in response to the dredgers, forcing it to respond to their activity with round-the-clock patrols. According to the Times, in 2020, 4,000 enormous Chinese sand dredging vessels were intercepted and sent away from Taiwanese shores by the Coast Guard—a 560 percent increase from the previous year.

Viewing satellite footage in February, Reuters reported that more than 200 sand dredging vessels were sailing off the coast of Taiwan. The same article described an incident where Taiwanese naval forces captured a dredger and forced it to regurgitate sand onto one of the beaches.

Taiwan lacks an effective response against these provocations, other than to continue its 24/7 coast guard patrols and hope for the best. Fortunately, China has partially pulled back; while roughly 4000 incidents were reported in 2020, according to Nikkei, only 160 were reported from January until April 2021.

Rather than leaving Taiwan alone, though, China has launched a wave of other incursions. Apparently, in an effort to intimidate Taiwan in advance of the G-7 summit, Taiwan recorded twenty-eight violations of its airspace by Chinese planes on Tuesday, the largest number of incursions in the island’s history. During the G-7, President Joe Biden encouraged other nations to criticize Beijing for its human rights abuses, such as the detention of Uyghur Muslims in China’s Xinjiang region.

China’s activities in Xinjiang were controversially described as a “genocide” by the outgoing Trump administration. Early on in President Biden’s term, relations between Washington and Beijing soured when Biden opted to maintain the classification.