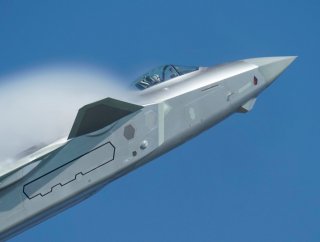 China’s Chengdu J-20 stealth fighter entered service with the People’s Liberation Army Air Force to great fanfare—and with dire-sounding analyses that the United States had lost its edge in the stealth aircraft domain. Though the J-20 does indeed make China the second country in the world to field a domestically-designed and produced stealth fighter, the platform is far from perfect.

Immediate parallels had been drawn between the J-20’s nose and canopy and that of the F-22 Raptor, one of the United States’ premier stealth fighters and arguably the stealthiest fighter currently in existence. This is, however, one of the few characteristics the two airframes share in common.

One of the J-20’s more prominent features are canards, small wing-like control surfaces near the cockpit. Although canards are not necessarily incompatible with stealthy designs, they present radar operators with another surface that can reflect radar away from an airframe and amplify an aircraft’s radar signature. But the potential problems don’t end there—engines are another area that hinders the J-20.

China has struggled to build a sufficiently-powerful engine for the J-20 domestically, which is just as important as a thrust-vectoring capability. Ultimately the newest variant of the Chinese-built J-20, the J-20B, is intended to be equipped with powerful Chinese-designed WS-15 engines that would offer increased performance, likely better fuel efficiency, and a higher-altitude flight envelope. But because the production of the newer engine is lagging behind schedule, China has opted for a foreign design made in Russia.

While the Russia-designed AL-31 engine does offer superior thrust output and improves the J-20 platform’s flight characteristics, the People’s Liberation Army Air Force would no doubt prefer not relying on foreign-sourced engines and move J-20B engine production to China.

Despite the newer Chinese engine missing production deadlines, sources claim that the development of the WS-15 is going ahead smoothly and that the engine should be ready in the next couple of years.

Is this an over-optimistic forecast? Time will tell.

Until then, Chinese J-20s will be carried aloft on the backs of Russian engines. Still, China’s J-20 will only become more capable as time goes on—most conspicuously in the area of flight performance, if not stealth. Watch this topic closely for future updates.