China’s Plan: a PLAN Base in the Atlantic 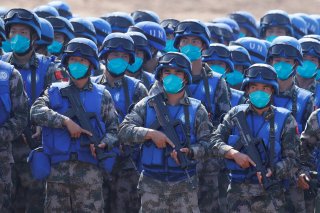 The United States is home to more than forty naval bases spread along the eastern and western coasts, while there are also overseas bases in the U.S. territories of Guam and Puerto Rico, as well as twenty-some bases around the world. These bases are critical to the global reach of the U.S. Navy but are also a crucial part of the national defense.

Now, China is looking to change that and according to a report in the Wall Street Journal, citing classified intelligence, the People’s Liberation Army Navy could create its first permanent military presence on the Atlantic Ocean on the coast of the small African nation of Equatorial Guinea.

While the plans for the PLAN haven’t been described in detail, the facilities at the port city of Bata would escalate the threat China poses to the United States. The deepwater port at Bata, which was already upgraded by the China Road & Bridge Co. between 2009 and 2014, could be used by Chinese warships to rearm and refit opposite of the East Coast. According to the report, U.S. intelligence first learned of the possibility of the PLAN base in 2019.

Gen. Stephen Townsend, commander of U.S. Africa Command, told the Senate in April that China’s “most significant threat” would be “a militarily useful naval facility on the Atlantic coast of Africa,” The Hill reported. Such a facility might enable China to “rearm with munitions and repair naval vessels,” Townsend added.

President Joe Biden has said that it remains a top priority of his administration not to let China surpass the U.S. military during his presidency. The Defense Department recently announced plans for major infrastructure improvements to be made at the U.S. military airfields in Guam and Australia as part of larger efforts to counter China.

It was in October that Jon Finer, Biden’s principal deputy national security adviser, traveled to Equatorial Guinea to meet with President Teodoro Obiang Nguema Mbasogo and his son, Vice President Teodoro Nguema Obiang Mangue. He urged them to reject China’s proposal to build a naval facility.

“As part of our diplomacy to address maritime-security issues, we have made clear to Equatorial Guinea that certain potential steps involving [Chinese] activity there would raise national-security concerns,” a senior Biden administration official said, according to Wall Street Journal.

China currently maintains a single overseas naval base in the nation of Djibouti, located on the “Horn of Africa” at the Bab-el-Mandeb Strait, which separates the Gulf of Aden from the Red Sea. It protects the approach to the Suez Canal. The African nation is unique because it hosts the United States Naval Expeditionary Base next to the Djibouti-Ambouli International Airport and other foreign military bases including a French airbase, an Italian support base and the Japan Self-Defense Force Base Djibouti—the first JSDF full-scale, long term overseas base—as well as PLAN’s first overseas military base.