China and the Quad: How Beijing Is Responding to ‘Containment’ 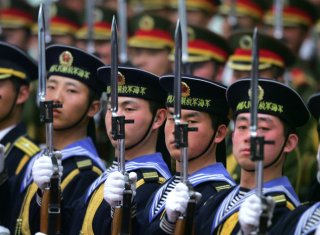 For long, the strategic community in China has adversely perceived most developments in the Indo-Pacific as part of a “China containment” strategy promoted by the United States. Accordingly, Beijing’s reactions have imbibed a tone of warning coupled with nervousness. In fact, initially terming the concept of the Indo-Pacific a “headline-grabbing” idea that will “dissipate” like “sea foam,” Beijing’s tolerance of the geostrategic concept has significantly increased over the past few years to militaristic and political vigilantism. A major factor shaping this calculated overture has been the revival of the Quadrilateral Security Dialogue (hereon, Quad)—comprising Australia, India, Japan, and the United States—as a premier security framework for the maritime region.

Amidst a rapidly changing international environment, where China’s rivalry with the United States is becoming a permanent feature, the almost two-decade-old Chinese concern is that a U.S.-led multilateral venture in the region will eventually emerge as an “Asian NATO.” Amidst China’s already antagonistic outlook towards the Quad, how will Beijing measure its up-gradation to a high-profile political consultation process as evinced in the March 12 Quad Leadership Summit (QLS)?

The Quad—as well as its derivatives like “Quad Plus” and now, the QLS—have drawn on the “like-mindedness” of the four constituent powers. Building on their shared commitment to a rules-based, free, and open Indo-Pacific, the Quad states have found synergy in their acceptance of China as a threat to the international and regional security architecture. Amidst talks of the Quad’s institutionalization (and at-present unconvincing potential militarization as an “Indo-Pacific NATO”), Chinese President Xi Jinping’s formal responses to the grouping have been largely mild—even as specific attacks on the United States have remained centrifugal to Beijing’s reactions.

China’s official response to the Quad meetings, echoed on multiple occasions by Foreign Minister Wang Yi, has termed the grouping as an “exclusive clique” that targets “third parties” such as Beijing to undermine its growth. Such sentiment has seen a continuation in China’s reaction to the QLS, with Beijing emphasizing the need for “openness, inclusiveness and win-win results” in the international system while refraining from forming “cliques.” Furthermore, Beijing has expressed hope that regional cooperation will “conform to the trend of the times, which is peaceful development.” Moreover, the QLS saw the release of a joint statement by the Quad nations—the first ever since the grouping’s revival in 2017—titled “The Spirit of the Quad.” This is symbolic of the increasing synergy within the Quad, the lack of which had long been considered a drawback of the grouping.

At the same time, Beijing has displayed strong objections to the Quad’s focus on the development and distribution of Covid-19 vaccines by forming a “vaccine partnership” amongst the four members. As the joint statement explicated, equitable provision of vaccines for countries across the Indo-Pacific will be a crucial priority for the Quad. However, Chinese Foreign Ministry Spokesperson Zhao Lijian strongly rejected this move as a “vaccine divide,” and termed the move as a part of “vaccine nationalism.” In all likelihood, Beijing is concerned about how the move may obstruct its evolving attempts at vaccine and mask diplomacy under the larger umbrella of building a Health Silk Road (HSR). The Quad’s pledge to provide a billion vaccine doses worth $600 million could seriously undermine China’s efforts, which have so far been a central and successful feature of Beijing’s global engagement, helping it to score political points amid the absence of Western aid.

While the QLS joint statement made no explicit mention of Beijing, it highlighted the leadership role it could potentially play for small and middle power littoral states in the Indo-Pacific, as well as become a platform for U.S.-China great power competition. The QLS thus marks a greater involvement of the Quad in the regional security framework, negating President Xi’s consistent belief that “security in Asia should be maintained by Asians themselves.” The year 2021 marks not only the Chinese Communist Party’s (CCP) centennial anniversary but also the beginning of the next chapter in the country’s grand strategy to achieve a “great power identity.” Officially endorsed at the recently concluded “Two Sessions” (or Lianghui) of the Chinese People’s Political Consultative Conference (CPPCC) and the National People’s Congress (NPC), China’s Fourteenth Five Year Plan is set to build a “modern military” as early as 2027 and promote the creation of a “modern socialist country” by 2049. To this end, a coordinated Quad outlook could present a grave challenge to the Chinese envisioned regional and global objectives.

Furthermore, the QLS has also launched various “working groups.” Ranging from a focus on climate change to emerging technologies, these groups highlight an expansion of the Quad into sub-structures, hinting at a more concretized and sustainable chapter in the grouping’s future. By promising to “redouble” commitment to the Quad, the QLS also noted that senior official, foreign minister, and leadership level dialogues would continue to take place under the aegis of the Quad around the year. Amid such political advances, it is likely that a defense minister-level dialogue could be soon established within the Quad ambit, and the long-term consequences of this would certainly not go unnoticed in Beijing. Besides, such a development could prompt a push by Xi on the institutionalization, if not militarization, of a “Himalayan Quad”—comprising China, Nepal, Pakistan, and Afghanistan—–as a rival grouping. The “Himalayan Quad” is no match for an Indo-Pacific Quad; still, Beijing’s rise and testimony to power is more centered around smaller groups, neighborhood politics, and weaker countries that could be a part and parcel of China’s rise, shaping a stronger Chinese worldview across the region. Beijing would certainly work to solidify such a grouping further.

More importantly, the economic dependency of the Quad countries—especially Japan, India, and Australia—on China has prevented the adoption of an openly anti-China policy by the grouping. Yet, the initiation of the QLS and the developments therein hint at a more potent synergy amongst the four states that was previously missing. To China, such a synergy is cause for alarm. Participation by Prime Minister Narendra Modi (despite the ongoing disengagement discussions along the India-China border), Prime Minister Yoshihide Suga (who is occupied with holding the Olympics which is key to his reelection prospects), and Prime Minister Scott Morrison (trying to rebuild “all time low” ties with Beijing) in the QLS highlight their status as “political democracies” and is no small win for the United States in its “Cold War” against China. In particular, China has long been unsettled by growing U.S. presence in Asia under the Quad and India’s partnership with the United States forms a key part. Beijing’s aggression at the Galwan Valley in June 2020 was partly reactive to the New Delhi-Washington synergy. The QLS highlights that Beijing’s strategy to deter India’s growing partnerships with like-minded states, especially the United States, have all but back-fired, instead prompting a closer synergy drawn staunchly on shared security concerns.

Simultaneously, the QLS comes in a new post-pandemic era with a noticeably different geopolitical and geo-economic environment. As an economic powerhouse, China has integrated itself deeply with global supply chains, but the disruptions caused during the pandemic exposed serious vulnerabilities in China-dependent states forcing them to re-evaluate their positions. India, Japan, and Australia, for instance, have launched a Supply Chain Resilience Initiative (SCRI) to restructure global supply chains away from China. President Joe Biden also recently called for a review of U.S. semiconductor supply chains. The four Quad states are also set to forge a new “rare-earth procurement chain” to supply raw materials for a wide array of technological products, threatening China’s domination in this domain. For China, these constitute targeted attacks to contain its growth. Beijing would, therefore, strongly shift focus at some stage to protecting its geo-economic advantage vis-à-vis the Quad.

In the coming times, Beijing’s grand strategy will be primarily focused on building its state power (both hard and soft) in terms of its perception of sovereignty and national identity. To this end, Beijing has maintained consistent growth in its annual defense budget (Beijing’s 2021 military budget is $209 billion, up 6.8 percent growth). Training, defense-related technological innovation, and military-civil fusion are the chief goals. China’s new coast guard law comes as part of the same trajectory of projecting China’s power beyond its borders. Beijing sees its ascendancy to a pre-eminent power as a given to restore its rightful place in the world order. However, a synchronized Quad could prove a major hindrance to China’s regional and global designs, provided the narrative of the Indo-Pacific sustenance is maintained purposefully. How China responds to this challenge in policy terms is a critical chapter that will hugely shape Indo-Pacific politics in times to come.

Dr. Jagannath Panda is a Research Fellow and Centre Coordinator for East Asia at the Manohar Parrikar Institute for Defence Studies and Analyses, New Delhi. Dr. Panda is Series Editor for “Routledge Studies on Think Asia.”