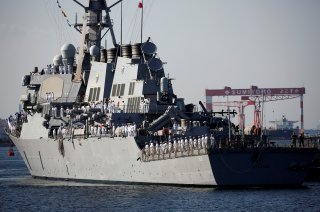 Citing freedom of navigation, the USS Milius, an Arleigh Burke-class guided-missile destroyer, sailed through the Taiwan Strait on Wednesday, prompting an angry response from Beijing.

According to a statement issued by the U.S. Seventh Fleet, which is headquartered in Japan and permanently stationed in the Pacific region, the trip through the strait was for routine transit, and “demonstrate[d] the U.S. commitment to a free and open Indo-Pacific.”

The Taiwan Strait separates China from Taiwan, the island it claims despite never having actually exercised rule over. The transit of the USS Milius is the first time a U.S. ship has passed through since the video meeting held between President Joe Biden and Chinese president Xi Jinping on Monday, November 15 in the United States and Tuesday, November 16 in China. At that meeting, Xi had cautioned Biden not to “play with fire” regarding the status of Taiwan, which the United States has long pursued a policy of intentional ambiguity on.

Several weeks prior to the summit, Biden had appeared to break the tradition of ambiguity when he affirmed that the United States would defend Taiwan in the event of a Chinese invasion; the White House later clarified that Biden’s remarks had not changed its position.

Relations between Washington and Taipei have improved, even as those between Washington and Beijing have deteriorated in recent years. Although the United States does not recognize Taiwan as an independent country, the two nations held their second annual economic dialogue this week, and leaders from Taipei have been invited to Biden’s upcoming Summit for Democracy in December. In October, Taiwanese President Tsai Ing-wen acknowledged that U.S. military advisers were present on Taiwan to train Taiwanese troops—a point on which the U.S. military has long maintained its own ambiguity.

China opposed the USS Milius crossing the strait, with Foreign Ministry spokesman Zhao Lijian describing it as a “deliberate attempt to disrupt and undermine regional peace and stability.”

The United States has launched hundreds of strait crossings, which do not intrude on Chinese territorial waters and therefore give Beijing little reason to complain. Nine crossings were conducted in 2019, a number that increased to fifteen in 2020, according to a Singaporean database. So far, the USS Milius has made eleven crossing in 2021.