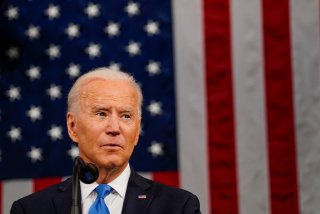 President Joe Biden is preparing for the Summit for Democracy, a two-day virtual meeting between the leaders of democratic countries. At the same time, China has launched a public relations blitz intended to showcase the superiority of its proclaimed democratic system.

On Saturday, China’s State Council released a white paper detailing the characteristics of Chinese democracy, as part of its competing International Forum on Democracy. The white paper, also released in the state-run China Daily newspaper, claimed that Chinese democracy had developed over seventy years and represented a superior representative system than the elected governments found in the Western world.

The paper highlighted the role of the National People’s Congress, a body of around three thousand legislators elected by local and regional “people’s committees” empowered to make and approve the country’s laws, similar in theory to the U.S. Congress. Although the Chinese Communist Party controls the lion’s share of seats within the body, it also shares power with eight other legally permitted parties as part of China’s “United Front.” Critics of this system have alleged that the Communist Party maintains all effective power and the other parties are only allowed to operate with its approval. The body’s critics have also claimed that it operates as a rubber-stamp parliament, invariably approving decisions made by the far-smaller Politburo Standing Committee, which includes President Xi Jinping and a handful of other high-level officials.

China also lacks independent media outlets and an independent judiciary, two other systems that are nearly always found in Western democratic states. The white paper argued that the role of Chinese media was to represent the country’s public opinion, although it made no reference to government censorship. It also claimed that the country’s judiciary played a vital role in overseeing the functions of the other branches of the state.

In spite of these claims, China is generally regarded in the West as an authoritarian dictatorship. The London-based Economist Intelligence Unit (EIU) ranked the country 151st out of 167 territories in its Democracy Index, while Freedom House gave Beijing a score of 10 out of a possible 70 points.

China’s democracy summit attracted a handful of left-leaning legislators and government officials from around the world. Former Japanese prime minister of the Spanish Communist Party. Biden’s Summit for Democracy is expected to receive a larger attendance, including representatives from many Western countries—but controversially also including several classified by Freedom House as “not free,” including Iraq, Pakistan, and the Democratic Republic of the Congo.

Also, America’s primary great-power rivals, Russia and China, were not invited to the summit—although Taiwan, the self-governing island that China has long considered part of its territory, received an invitation.