China is Dropping Bombs and Laying Mines in the Taiwan Strait 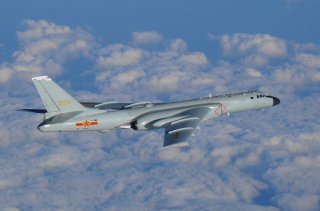 Chinese bombers are dropping bombs, conducting live-fire exercises, and laying mines over areas of the South China Sea and Taiwan Strait in a clear effort to show force and attempt to deter the United States and its Western allies from intervening to protect Taiwan.

A few of the H-6J bombers took off at night and performed missions under heavy clouds and inclement weather conditions.

The H-6J was officially revealed by China’s Ministry of Defense just last year and, according to the Global Times,  it is capable of carrying YJ-12 air-launched anti-ship missiles.

“The drill showed that the H-6J maintains its traditional bombing capability, even though it can also be armed with standoff weapons like anti-ship and land-attack cruise missiles,” the Global Times reported.

The bomber live-fire exercise, however, may not have actually demonstrated extremely consequential combat capability. A large, non-stealthy bomber such as the H-6J would only be truly impactful in a great power warfare engagement in a few limited respects.

The People's Liberation Army Air Force (PLAAF) would need to have established air superiority in order for the H-6J to fly low-altitude mine-laying or precision bombing missions, something which would not be at all assured in any kind of great power confrontation. The United States and its allies may or may not have advanced air defenses in the South China Sea. However, there are established systems in Taiwan, Japan, and South Korea.

A bomber such as the H-6J would be extremely vulnerable to ship-launched U.S. Navy fifth-generation aircraft and would be easily seen by drones and networked ground surveillance systems. An aircraft as large as the H-6J could also be vulnerable to anti-aircraft fire coming from surface ships, depending upon how low it was flying to lay mines in littoral areas.

The real added value when it comes to the functional impact of a large, B-52-like heavy bomber would more likely be in its standoff weapons such as extremely high altitude precision bombs or the use of long-range precision cruise missiles able to be effective at stand-off ranges.  Otherwise, precision bombing missions would need to come from an undetected, high-altitude stealth bomber such as China’s new H-20 or be executed by fighter jets during or after a war to establish air supremacy. Should the United States operate amphibious assault ships and aircraft carriers in the region in any measurable capacity, sea-launched fifth-generation aircraft such as the Lockheed Martin F-35B and F-35C stealth fighters would likely make it extremely difficult for large Chinese bombers to operate with any measure of success.