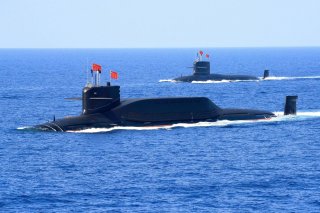 The Chinese have just added two new nuclear-armed ballistic missile submarines to their Navy, bringing the total number of so-called SSBNs in the force up to six. While the U.S. operates twice as many, the growing number of Chinese nuclear-deterrence submarines massively expands the ability of Beijing to hold the continental U.S. at substantial risk.

Nuclear-armed submarines are intended to ensure a second-strike catastrophic response in the event of a nuclear attack, essentially ensuring complete destruction of the attacking country. They quietly and secretly patrol at great depths in undisclosed locations to function as a large deterrent force against a first-strike nuclear attack.

As recently as May of 2020, two additional “Type 094 SSBNs, had entered service,” according to a Congressional Research Service Report called “China Naval Modernization: Implications for U.S. Navy Capabilities.”  The newest type of SSBN, according to the Navy report, is armed with 12 JL-2 nuclear-armed, submarine-launched ballistic missiles, the CRS report explains. They are also armed with Anti-Ship Cruise Missiles, wire-guided and wake-homing torpedoes and mines. Perhaps of greater concern, the Chinese have already test-fired an emerging JL-3 nuclear armed intercontinental ballistic missile with a reported range of more that 5,600 miles, according to a 2018 CSIS report. The missile is solid fueled.

China clearly appears to be expanding its nuclear-armed submarine reach on a global scale, as there have been several news reports of Chinese SSBNs seen in various hot-spots around the globe.

The CRS report estimates that, by this year, the Chinese are operating 55 diesel-electric submarines and seven nuclear-powered submarines.

Overall, the Defense Intelligence Agency estimates that China may operate as many as 70 submarines, according to the CRS assessment; in addition, the CRS report estimates that China will have as many as 8 SSBNs and 76 submarines overall by 2030. Most of China’s submarines are non-nuclear, and according to the CRS’ reference to the Office of Naval Intelligence, “China’s submarine force continues to grow at a low rate, though with substantially more-capable submarines replacing older units. Current expansion at submarine production yards could allow higher future production numbers.”

While there is likely little known about the exact technological make-up of the emerging Chinese Jin-class SSBN, it may not rival the emerging U.S. Columbia-class submarines. The new, now-in-development Columbia class may be the quietest undersea boat ever to exist. It uses a quiet, efficient electric-drive and a differently configured X-shaped stern.

What is known about the Chinese Jin-class is that it will be armed with an extremely lethal, 5,600 mile range nuclear armed ballistic missile, the JL-3. For instance, a 2018 CSIS report says the Chinese have already test fired the weapon which, by any estimation, could easily hold the continental U.S. at great risk.