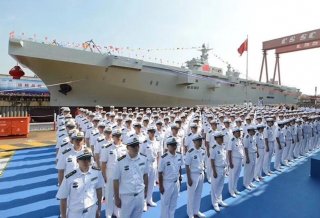 Despite limited experience, and in the midst of a global viral pandemic, China launched their second Type 075 class assault carrier—and it outclasses most other carriers in the region.

China’s Type 075 is an amphibious assault ship that will be able to land PLA Navy marines and equipment in much the same way as the United States Wasp-class or America-class ships. It is also capable of helicopter operations and can reportedly house up to 30 attack helicopters.

In addition to the Type 075’s airborne capabilities, it has a floodable well deck that can launch and receive boats, hovercraft, or amphibious assault vehicles, potentially giving the new ship a potent ship-to-shore capability.

The Type 075 is huge—estimates put in the 35,000 to 40,000 ton range—and it easily outclasses other ships in the Indopacific region. The Type 075 is also significantly larger than the Type 071 that precedes it.

Fire in the Hole

The first of the Type 075 class apparently caught fire in early April while at port in Shanghai. Images on social media revealed the ship had been badly burned. Massive scorch marks were visible on the stern and appeared to lead into the well deck, implying that the fire had potentially originated (or possibly spread) into the belly of the ship. The fire, though seemingly large, was put out rather quickly, perhaps an indication that the fire had not spread as substantially as first appeared from online images.

Interestingly, the coronavirus pandemic has not seemed to slow construction down. The naval defense expert H. I. Sutton wrote that “defense analysts have been able to track progress on the carrier via candid photographs and overhead satellite imagery.”

Open-source intelligence has been one of the great boons of the internet age. He continued, “an analysis of crane movements in satellite images showed the level of work in the yard. It appears uninhibited by the coronavirus pandemic.”

Though the Type 075 certainly offers China new capabilities, the ship itself is not what is most impressive—the speed with which it was built is more incredible. Despite significantly less experience building amphibious carriers—and in the midst of a global pandemic—China is somehow able to launch a new carrier. A significant achievement, especially during peacetime.

Eyes on the Prize

The Type 075 carriers will likely be the People’s Liberation Army Navy workhorse for years, if not decades, to come. The Type 075 is also a clear demonstration of China’s increasing competency in building a truly blue-water fleet. China’s adversaries in the Indo-Pacific, and the South China Sea, will be watching intently.