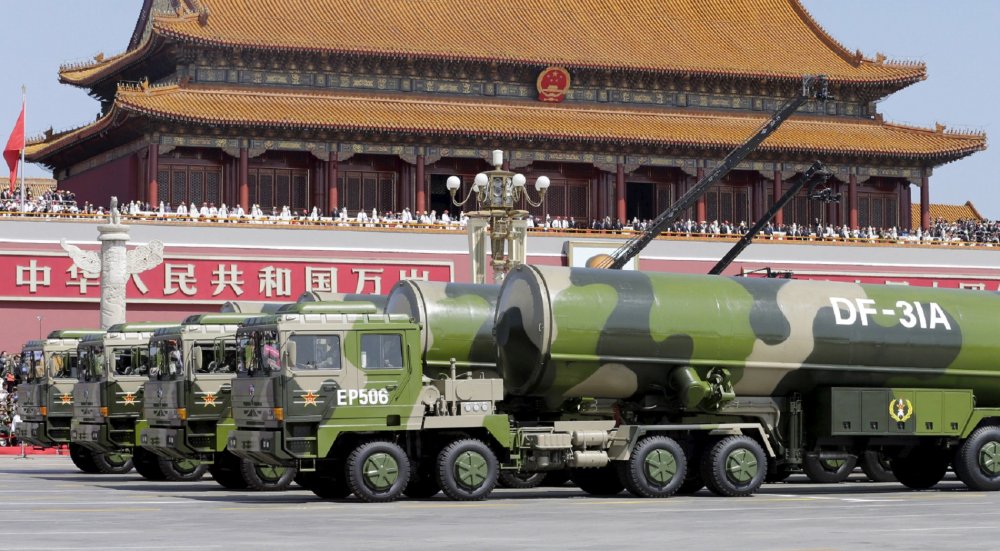 At the same time, experts stressed that China would never be the first country to launch a nuclear attack.

The report didn't specify the time or location of the launch or the type of missile involved.

The People's Liberation Army Rocket Force, or PLARF, is getting new and better missiles with better multiple-independent-reentry-vehicle warheads, or MIRVs, according to a January 2019 report from the U.S. Defense Intelligence Agency.

Song told Global Times the new DF-41 might appear in public for the first time during the October 2019 celebrations marking the 70 anniversary of the founding of the People's Republic of China.

But China's nuclear arsenal is small compared to America's and Russia's own arsenals. Beijing maintains 280 nuclear warheads on ICBMs, medium-range rockets and submarine-launched missiles. The United States possesses 3,800 nukes and deploys 1,750 of them. Russia has 4,350 warheads and deploys 1,600.

The United States and Russia risk a nuclear arms race between them. Between withdrawing various treaties and developing new, seemingly more useable smaller nukes and deterrence-undermining missile-defenses, Washington and Moscow might seem determined to make the world less safe.

U.S. president Donald Trump's 2018 nuclear-weapons review broadened America's atomic rules of engagement. Before, it was U.S. policy that only a nuclear sneak attack or some other existential threat would justify a retaliatory atomic strike from the United States.

By contrast, Trump's nuclear review warned that a major hacking event or an online assault on U.S. financial infrastructure could warrant a nuclear counterattack.

Combined with looser policy, Trump's own recklessness could elevate the likelihood of atomic war. "The risk is that he will be quicker to order their use in a confrontation with Russia, China, North Korea or Iran and that the conflict will escalate to all-out nuclear war," Bruce Blair, a nuclear expert at Princeton University, told The National Interest.

Beijing, on the other hand, has urged restraint and reaffirmed its commitment to a "no-first-use" policy. "As China promises never to use nuclear weapon first and will only use them in a counterattack, China's strategic missile storage facilities must be able to survive the first wave of hostile nuclear strike," Global Times paraphrased Song as saying.

"Without a first strike against China, China will never use the weapons," Global Times stressed. "An ICBM loaded with nuclear warheads will likely never be used as it would precipitate an all-out nuclear war, say analysts. The weapon's primary purpose is deterrence, and to facilitate political and diplomatic discussions."

U.S. Security in a Proliferated World Will Require a New ICBM