China Likes to Brag, But the J-20 Is No F-22 Stealth Fighter 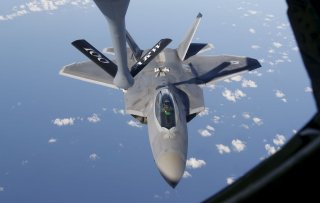 “China’s J-20 was inspired by the F-22’s deployment. The Chinese aircraft designers used the Raptor as a rival and the F-35 [stealth multi-role fighter] as a tactical opponent to help them to come up with a more practical and capable fighter jet,” Chinese defense expert Song Zhongping told the South China Morning Post, according to an article in Forbes.

The Forbes report also makes the claim that the F-22, with a 500-mile range, is perhaps better suited for Europe than the Pacific due to geographic constraints. The J-20, by contrast, has a reported range of 700 miles, the article claims, making it better equipped to operate in the vast expanse of the Pacific theater.

“The J-20’s 700-mile combat range gives the Mighty Dragon a longer reach over hotspots such as the South China Sea,” the article states.

However, the Chinese claim stated by the article seems to miss several pertinent points, specifically the extent to which today’s F-22 is vastly different than the one that first emerged in the late 1990s. It is a well-known phenomenon that many legacy aircraft, such as the B-52, B-2 or F-15, can be upgraded to the point that they are virtually an entirely different plane.

In many cases, older airframes can, with some maintenance, remain viable for decades, yet sensor, weapons, propulsion and avionics modernization completely changes the equation. While success with a host of modernization efforts does not, in the minds of Air Force weapons developers, remove the need for new aircraft platforms, they do indicate how the combat capability of legacy aircraft can be improved. For instance, the B-52, F-15 and B-2 have all received new computer technologies, advanced next-generation weapons, completely different sensors and airframe upgrades.

When it specifically comes to the F-22, there are a number of nuances to consider. The F-22, still widely regarded as the most advanced air-to-air fighter in the world, has received new weapons, new AESA radar detection and reinforced or upgraded stealth coating. A recently completed software upgrade to the F-22 integrated new, longer range, more capable air-to-air weapons such as the AIM-9X and AIM 120-D.

The new weapons, now operational on the F-22, are intended to enhance its margin of superiority over any rival aircraft; its AESA radar enables more sensitive, longer-range radar detection and the new coating likely strengthens or improves its stealth characteristics.

Although many specific attributes of the J-20 may still be unknown, it may not be clear that the Chinese aircraft can rival the supercruise speed, sensory sophistication, weapons precision or sheer maneuverability of an F-22.

Osborn previously served at the Pentagon as a Highly Qualified Expert with the Office of the Assistant Secretary of the Army - Acquisition, Logistics & Technology. Osborn has also worked as an anchor and on-air military specialist at national TV networks. He has appeared as a guest military expert on Fox News, MSNBC, The Military Channel and The History Channel. He also has a Masters Degree in Comparative Literature from Columbia University. This article first appeared last year.