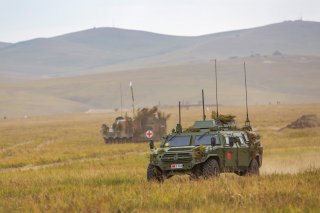 The vehicle, called a third-generation Dongfeng Mengshi, is also configurable as a command and control platform or a launchpad for heavier weapons, according to a report in the Chinese-government-backed Global Times newspaper.

“It can also remove its transport function and instead be installed with different modules so it can become a command vehicle, a self-propelled howitzer, a self-propelled multiple rocket launcher system and more,” according to the paper, which quotes a Chinese military expert.

Interestingly, the Chinese report asserts a claim that their new vehicle is engineered with “bulletproof plates that are superior to the U.S. Humvee,” a statement likely to raise a few questions.

Certainly, specifics related to the armor configuration of the vehicle are not likely to be available, yet the new vehicle would need to be substantially fortified with new protections to rival the combat performance of an up-armored Humvees. The U.S. Army spent many years during the wars in Iraq and Afghanistan to strengthen protections for its Humvee by adding additional armor plating or “up-armoring”, blast-attenuating seats and protected “capsule” like structures to secure soldiers from improvised explosive device (IED) blasts in the event that wheels and other external structures are exploded.

However, it is also true that the Humvee did prove vulnerable to attacks from roadside bombs, especially those daisy-chained together and accurately times for maximum blast impact. This is why the U.S. Army urgently built and fast-tracked the now-famous Mine Resistant Ambush Protected Vehicles and lighter weight MRAP-All Terrain Vehicles.  These vehicles, credited with saving the lives of thousands of soldiers, were delivered to Iraq and Afghanistan by the thousands. The chassis was elevated higher off the ground, forcing blast fragments to travel farther to impact and, perhaps most of all, they were built with an innovative, blast-deflecting V-shaped hull. MRAPs were specially engineered with a reinforced body such that, in the event of a massive IED attack, the wheels may fall off and a vehicle might be almost completely exploded, yet the protective capsule surrounding the soldiers itself would remain intact.

Few additional details have been provided about the new Chinese vehicles, and the public photo does not show the underbelly so there may not be a way to see if it is built with a blast-deflecting V-shaped hull. However, the Chinese vehicle does look larger, longer and heavier than a U.S. Army Humvee. The sides of the Dongfeng Mengshi are not flat like a Humvee but instead angled almost exactly like a U.S. Army Armored Security Vehicle. Its size looks more like an Army ASV, a vehicle substantially better protected than a Humvee. Also, to a certain extent, it might even seem silly to try to compare a newly engineered or upgraded tactical vehicle to a decades-old Humvee platform. A more fitting comparison might be looking at the new Chinese Dongfeng Mengshi as it compares to the U.S. ASV or Joint Light Tactical Vehicle.