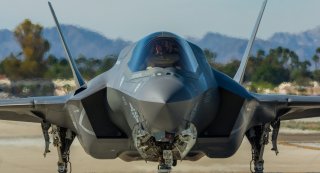 The F-35 Joint Strike Fighter is well known for its stealth configuration, long-range, high-fidelity sensors and advanced computing. But what about a less frequently noticed ability to launch an aggressive, all-out, first-strike aerial attack?

At the Air Force’s Red Flag exercise several years ago, the F-35 made headlines for its ability to find, track and destroy a larger number of enemy fighters from long distances without being seen. This wargame scenario, closely replicating actual combat, enabled an F-35 to save a number of its friendly blue force fighters by alerting them of impending enemy attacks. While extremely effective and potentially even paradigm-changing when it comes to combat operations, this combat performance could be described as somewhat passive, defensive, or static as it relied upon sensing enemy activity from safe stand-off distances.

“The biggest difference between fourth-generation fighters for me was with the fourth generation, I was always managing all the different systems, from electronic warfare to the weapons to the radar to any kind of targeting pod, any kind of sensor I had. I was one hundred percent focused on making sure they were all integrated within my own cockpit in the fourth generation… whereas what I've seen in the F-35 is that it's all done for you. The enhanced electrical warfare that we have in the F-35 allows us to get much closer ranges on some of these threats coming on board, as well as having a magnificent radar that allows you to shoot beyond visual range before any enemy would even detect you. So that’s a huge advantage with the fifth-generation fighter,” Monessa “Siren” Balzhiser, F-35 Production and Training Pilot at Lockheed Martin, told the National Interest in an interview.

This kind of advanced sensing described by Siren can also be used for highly precise, high-speed offensive attack operations, as evidenced by the Air Force’s current effort to fly the F-35 in an “aggressor” mode.

Now, the F-35 is immersed in massive offensive operations wherein it is being used for aggressive, high-maneuvering, first-strike attacks in this year's advanced Red Flag exercise, an Air Force report said.

This means that blue or “friendly” forces will be faced with aggressive attacks from adversary F-35s, to prepare the force to defend against and fight enemy fifth-generation fighters. The intent is to push the envelope and prepare the U.S. Air Force for major warfare against an extremely sophisticated, technologically advanced enemy operating fifth-generation stealth fighter jets.

Acting as a hostile “aggressor” on offense, the F-35 is tasked with finding and exploiting gaps, seams, or areas of vulnerability within the “blue” force.

“What aggressors are able to present to them is a more challenging problem for blue air assault. The aggressors know the threat replication a little bit better, and they have studied the adversary and the way that the adversary would actually react to a specific situation. Based on our focus toward great power competition, we need to make sure that those guys are ready, and we do that by presenting the best possible atmosphere we can,” Lt. Col. Chris Finkenstadt, 64th Aggressor Squadron commander, said in the Air Force report.

Using the F-35 in this capacity during the Red Flag exercise introduces a wide sphere of advantages, as it can not only help blue forces identify and refine defensive tactics against F-35s representing a potential enemy force, but can also help F-35 pilots themselves sharpen offensive operations.

An F-35 can, for example, use its speed, stealth and maneuverability to close in on enemy aircraft formations and, using precision weaponry enhanced by software upgrades, conduct fast-moving, aggressive first-strike attacks. This kind of operation might be entirely necessary should the U.S. Air Force be confronted with enemy fifth-generation fighter jets equipped with sensor ranges comparable to an F-35.  Alongside its stand-off range sensor technology advantage, the F-35 is also refining its abilities to prevail in a close-in fight involving active attack and air-to-air combat.

The aircraft continues to expand its offensive strike capability through software upgrades, meaning in coming years the F-35 will increasingly be integrating new generations of weapons, such as the Stormbreaker air-dropped bomb. The Stormbreaker is able to track and destroy moving enemy targets at distances out to forty miles in all weather conditions with its tri-mode seeker using laser guidance, infrared sensors and millimeter wave technology.  Yet another factor is the integration of the AIM-9X missile into the F-35, an air-to-air attack weapon that can be fired “off-boresight,” meaning it can reroute, change course and adjust its trajectory in flight to destroy targets behind or on the side of an F-35. This massively multiplies combat attack options, as an F-35 will not need to be aligned in a straight-on or linear way to destroy an enemy fighter, something which gives the aircraft an advantage in air-to-air warfare.

At the same time, the F-35 operates with a lesser recognized ability to use speed, lower altitude maneuverability and its 25mm cannon to conduct close air support operations.

While many of the exact combat circumstances or specific scenarios entertained during Red Flag are likely not available for security reasons, the exercise is dedicated to very closely replicating exact and highly intense combat circumstances likely to unfold in the event of a major power confrontation.

Ultimately, F-35 weapons are launched with speed, range and precision due to the F-35s much-discussed computer-generated “sensor fusion,” which paints an integrated combat picture for pilots from otherwise disparate pools of incoming data.

“In a fourth-generation fighter, you have to mentally build that model and then try to make decisions. Of course, that can be challenging depending on how dense the threat environment is regarding both air and ground threats or other threats that may be out there. This is in contrast to an F-35, where you're seeing a much larger picture, informed by offshore sources as well, and you're seeing it from your own platform,” Chris “Worm” Spinelli, an F-35 Test Pilot at Lockheed Martin, told the National Interest in an interview.