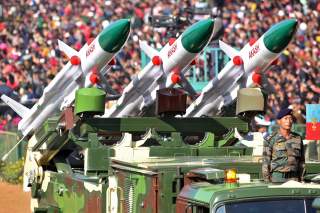 But does this reflect a problem with India – or is China trying to discourage its rival from building defenses against Beijing’s ballistic missiles?

“Generally speaking, although India has made considerable progress in the independent R&D and deployment of ballistic missile defense system in recent years, it is still faced with a string of difficulties, such as inadequate capital, unsmooth R&D process, heavy reliance on other countries regarding key technology, and incomplete systems,” writes Fang Xiaozhi, a researcher at the BRI Institute of Strategy and International Security at Fudan University. “New Delhi has a long way to go before it can establish a truly effective ballistic missile defense system and fully exert its real combat force.”

The article appeared on chinamil.com, the Chinese military’s English-language Web site. Though the article included a disclaimer that it did not necessarily reflect the views of the Web site, it seems unlikely that an official People’s Liberation Army site would have run the story unless it was intended to convey a message.

India has become a new player in ballistic missile defense (BMD), developing both BMD interceptors as well as an anti-satellite weapon. Indian BMD is a two-tiered system similar to the U.S. Safeguard system of the 1960s: long-range Prithvi rockets (based in the Prithvi tactical ballistic missile) for exo-atmospheric intercepts in space, and the Advanced Area Defense missile for endo-atmospheric intercepts within the Earth's atmosphere,  when the target warhead is descending through the atmosphere.

In January 2020, government officials told Indian media that BMD development and testing had been successfully completed, and that the system was ready for deployment.

“The Indian Air Force and the Defense Research and Development Organization (DRDO), the system developer, are seeking the approval to install and activate this system near the capital city of New Delhi, which is expected to take three or four years,” said Indian news site The Print.

However, the Chinese analyst dismissed Indian successes as invalid. “India has adopted the most conservative plan in all its anti-missile tests - only intercepting a target whose launching spot, flying velocity and direction, altitude or ballistic parameters are all known and there is no actively maneuvering and changing trajectory,” Fang said. “This testing approach of ‘hitting a fixed target’ doesn’t comply with real combat situation, nor can it truly test the anti-missile system’s stability and reliability, so the testing results are hardly reliable.”

Fang also asserted that India doesn’t have the technological backbone for effective missile defense. “A missile defense system is a very complicated project that reflects a major country’s overall strength, and it requires a thorough and solid technical foundation in terms of anti-missile early warning system, missile interception system and command and control system, in all of which India has nothing much to say for itself. Compared with Russia, the US, Israel and other countries with strong anti-missile capabilities, India’s technology is completely left behind and its R&D has had too many twists and turns. Besides, it has conducted too few tests, far from enough for it to fully understand the technology.”

However, the problem with this analysis is that China isn’t exactly a disinterested observer. China’s rivalry with the U.S. over the Western Pacific tends to obscure China’s rivalry with India. The two nations fought a brief war in 1962, in which China seized territory on India’s northwest frontier.

China is indisputably more powerful, with a larger economy and a military that is rapidly procuring advanced conventional and nuclear weapons. But India also has nuclear weapons, and an Indian missile system that could intercept Chinese ballistic missiles would enhance India’s deterrence capabilities versus China.