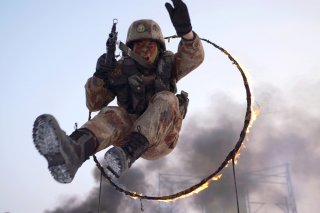 A Chinese newspaper is using provocative language to denigrate Japan’s growing military ability and claim that Japan would “lose badly” should it try to defend Taiwan.

The Global Times, which serves as the mouthpiece of the Chinese Communist Party, has accused a new Japanese white paper as “very warlike” and at odds with the countries’ pacifist constitution.  A portion of the Japanese White Paper, called “2021 Defense of Japan,” states “stabilizing the situation surrounding Taiwan is important for Japan’s security and the stability of the international community.” The Japanese white paper also says that stability in the Taiwan Straits is “more important than ever” and threatened by “increasing military pressure” from China.

Japan’s gesture of support for Taiwan and the United States clearly seems to have inspired the aggressively worded commentary from Chinese military experts cited in the article. The Global Times also quotes Chinese military officials on this topic who claim that “China must and will reunify” Taiwan with the mainland.

Also, in a bold claim, the communist newspaper says China is now fully capable of militarily defeating the United States in the Pacific region, adding that Japan would also be defeated by the Chinese People’s Liberation Army should a massive conflict erupt.

Suggesting support for Taiwan’s independence represents a decisive move for Japan which is not only massively modernizing its military force with new missiles, drones, radars and F-35 fighter jets, but also engaging in a greater number of cooperative military exercises, training, drills and war preparation operations.

If some kind of major power conflict were to erupt in the South China Sea area, then Japan would be uniquely positioned to support the United States given that Japanese destroyers now operate Aegis radar for ballistic missile defense in a way that could network with partner U.S. ships. Globalfirepower.com 2021 assessments note that Japan operates thirty-seven destroyers.

The Chinese paper further criticizes Japan for now beginning the process of selling arms to Taiwan and drawing upon its close alignment with the United States to provoke China.

Apart from threatening military consequences against Japan, China is also threatening to impact Japan’s financial interest based upon its involvement in Chinese business markets.

“China won’t allow Japan to earn huge amounts of money from its market and threaten its national security and sovereignty at the same time. If Japan still tries to follow the United States in containing China and even dares to defend Taiwan secessionist forces, it will lose badly,” according to The Global Times.

While perhaps numerically small when compared with larger great powers such as China and the United States, the Japanese military could have a very large impact regarding any effort to defend Taiwan. Japan’s Aegis Radar-engineered destroyers could defend Taiwan against ballistic missile threats