China Wants to Lead the World on AI. What Does That Mean for America? 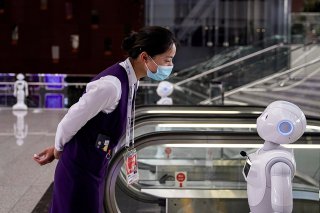 Years ago, the thought of using software to fight a deadly pathogen might have seemed far-fetched. Today, it’s a reality. The Coronavirus pandemic has caused monumental shifts in the use and deployment of artificial intelligence (AI) around the world.

Of those now using AI to fight Coronavirus, none are more prominent than China. From software that diagnoses the symptoms of Coronavirus to algorithms that identify and compile data on individuals with high temperatures vis-à-vis infrared cameras, China is showcasing the potential applications of AI. But Beijing is also demonstrating its willingness to leverage the technology to solve many of its problems.

To understand the potential benefits and perils, we need to delve a bit deeper into the subject of AI itself. Artificial intelligence essentially falls into two categories: narrow and general. Narrow AI is a type of machine learning that is limited to specifically defined tasks, while general AI refers to totally autonomous intelligence akin to human cognition. General AI remains a distant dream for many, but the real-world implications of narrow AI exist in the present—and China is working diligently to become a world leader in it.

In his book AI Superpowers: China, Silicon Valley, and the New World Order, former Microsoft executive and Google China president Kai-Fu Lee describes how the country began rapid development of AI as a response to AlphaGo, a software program that successfully bested the world’s top player in the ancient game of Go back in 2017. That victory, Lee explains, showcased China's Communist Party (CCP) research and technology with infinite potential.

The revelation was a sea-change. In its 2019 Annual Report, the U.S.-China Economic and Security Review Commission noted that the “Next Generation AI Development Plan” released in 2017 by China’s State Council “marked a shift in China’s approach to AI, from pursuing specific applications to prioritizing AI as foundational to overall economic competitiveness.”

The results have been rapid—and pronounced. China is still considered to be “second” in the race to AI (behind the U.S.), but it is quickly gaining traction. As the United Nations World Intellectual Property Organization (WIPO) noted last year, China leads in AI-related publications and patent applications originating from public research institutions, and the gap is shrinking between the U.S. and China in patent requests originating from the private sector.

And because the aggregation of vast swathes of data is what drives the most effective artificial intelligence, China is in a unique position to persevere. With the world’s largest population and close to no data privacy protections, the PRC has the potential to develop the world’s “best” AI products.

Beijing is also working hard to maintain its freedom of action in this domain. Back in March, China tried—and nearly succeeded—in installing its candidate as head of the WIPO, a move that would essentially have assured that its lengthy track record of violating intellectual property rights, theft and espionage would not come with any consequences.

Those practices are already raising international hackles. In April of 2020, Bloomberg reported that electric carmaker Tesla is now seeking further legal action to analyze the source code of a competitor’s product in China after a former Tesla employee allegedly left the company in 2018 for the Chinese startup, carrying with him secrets from Tesla’s self-driving AI, AutoPilot.

But the CCP is also harnessing AI to strengthen its authoritarian state. Against the backdrop of the coronavirus pandemic, the Chinese government has stepped up its repressive domestic practices, including its persecution and detention of Uyghur Muslims in Western China and a broad crackdown on Hong Kong. Worryingly, Chinese advances in AI seem to be empowering these practices, as well as making them more effective.

These dynamics should matter a great deal to the United States, which has stepped up its strategic competition with China in earnest in recent months. China’s activism on the AI front, and its attention to this emerging technology, has made abundantly clear that the PRC places tremendous value on dominating the field of AI. Washington should think deeply about what that would mean, in both a political and a technological sense. And then it should get just as serious in this sphere as well.

Ryan Christensen is a researcher at the American Foreign Policy Council in Washington, DC.