China's Air Force Must Choose: The J-20 Stealth Fighter or the J-11D (Who Wins?) 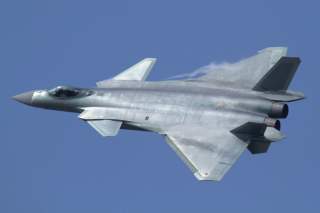 A recent Jane’s 360 report sheds light on what appears to be the ongoing competition between the J-20 and J-11D programs for funding, illustrating the difficult cost-benefit questions facing the People's Liberation Army Air Force (PLAAF) as it decides on its aircraft developmental strategy.

The J-11D project, long thought dead, has resurfaced in a recent documentary published by the China Flight Test Establishment (CFTE) at Xi'an Yanliang airbase. Chinese defense industry sources have since confirmed to Jane’s that the J-11D program is, in fact, still on track. The J-11D is a successor to the original J-11, introduced in the late 1990’s as a licensed variant of Russia’s prolific Su-27 Flanker. The J-11D features all the iterative improvements we’ve come to expect from a “fourth generation plus” air superiority fighter, including 3d thrust vectoring, expanded armaments suite and more weapons hardpoints, and retractable aerial refueling probe.

In addition, the J-11D will reportedly boast a Distributed Aperture System-- an advanced sensor tracking package also found on its J-20 counterpart and the F-35-- and a relatively stealthy airframe to drive down its radar-cross section. The J-11D is comparable in appearance and loadout to the Su-35, and unsurprisingly so: the PLAAF ordered over two dozen of the Russian fighters in 2015. J-11D prototypes were already in production by 2015, but there are always benefits to studying and reverse-engineering a competitor’s product. At the very least, Chinese aerospace engineers could have used the Su-35 for testing purposes when refining the J-11D at its later stages of development. In any case, the J-11D is decades younger than its Russian analogue and predictably features newer avionics, like an AESA radar as opposed to the Su-35’s Passive electronically scanned array (PESA) system.

The J-11D was never a direct competitor to the J-20, except in the sense that the two jets are being developed by rival Chinese aircraft corporations-- Shenyang and Chengdu. The technical differences could not be starker: the J-20 is a long-distance strike aircraft made to destroy soft targets and critical infrastructure behind enemy airspace, while the J-11D is an air superiority fighter that builds on the dogfighting potential of its J-11 predecessor. The J-11D also boasts more external weapons hardpoints-- enabling greater diversity in armament loadout-- and its PL-21 long-range air-to-air missiles make it a capable AWACS (airborne early warning aircraft) killer.

If anything, the two fighters are complementary in their battlefield role.

Under ideal budgetary circumstances, the PLAAF might very well want to field both. China’s current circumstances may be less than ideal, however. According to Jane’s, it is precisely the combined cost of the two programs that put the J-11D on the chopping block, to begin with. Even so, the J-11D is heavily based on the existing J-11 and is therefore likely to be cheaper to develop and mass produce than its J-20 counterpart. Nor does it built around the unreliable, costly, experimental WS-15 engine that can’t seem to escape development purgatory.

The J-20 has solidified its position as China’s flagship fighter project, representing a decisive, inter-generational leap in Chinese aircraft technology. However, the J-11D is a formidable 4+ generation fighter in its own right. Both have a clear place on China’s aircraft roster; the only question is whether the PLAAF’s budget will permit it.