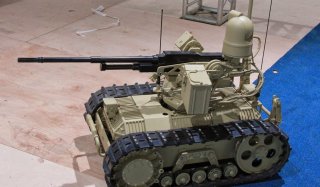 Jane's reported that China North Industries Corporation's (Norinco's) Sharp Claw I unmanned ground vehicle (UGV) has entered service with the People's Liberation Army Ground Force (PLAGF). This was announced on China Central Television 7 (CCTV 7), which reported that the tracked, combat and reconnaissance UGV was now in service with the Chinese military.

It isn't clear how many of the Sharp Claw I UGVs have been deployed or when this platform even entered service. The small tracked vehicle was first unveiled at the Airshow China 2014 while an improved version was then shown at Airshow China 2018 and featured several upgrades including a short-range electro-optical payload, machine vision, and lighting suite.

The Sharp Claw I can operate autonomously, according to developers. What could be a concern to some is that it can be armed with a 7.62mm light machine gun – but it is unclear if that would still require human control.

This is actually part of a dual system that includes the larger Sharp Claw II UGV, a 6x6 wheeled unmanned ground vehicle that was designed to carry out battlefield reconnaissance, patrolling, assault and transport missions in dangerous, dirty, monotonous and dull combat environments. The Sharp Claw I is essentially a smaller scout that "hitches" a ride in the Sharp Claw II's cargo bay.

The Sharp Claw I isn't the only UAV that has been developed for the PLAGF. Another Chinese firm, Zhong Tian Zhi Khong Technology Holdings Company displayed its "Mule-200" UGV at the Unmanned System Exhibition and Conference 2020 (UMEX2020) in Abu Dhabi in February. It is a medium-sized, multipurpose crawler (tracked vehicle) that can accompany infantry units and be used to transport ammunition and supplies. The ability to transport ammunition inside its armored hull is unique to UGVs.

The Mule-200 can also be equipped with firearms to provide fire support at close ranges, and its caterpillar tracks can allow it to travel over a variety of terrain, and its gasoline-electrical hybrid engine offers a top speed of 50kpm while it has a range that is about 50km.

How the Sharp Claw I/II or Mule-200 would handle battlefield conditions is of course an unknown for now. To date Russia's Uran-9 robot tank has been the only semi-autonomous weapon/remote-controlled platform to be deployed in a combat environment. The Uran-9, which features a formidable gun and missile armament, was deployed in Syria where it experienced numerous problems.

However, it should be remembered that manned tanks weren't exactly a roaring success right out of the gate!

While UGVs haven't been as widely deployed as unmanned aerial vehicles (UAVs), the market could be growing. Military planners around the world are continuing to invest in the UGVs and according to a report from Global Market Insights, "Unmanned Ground Vehicle Market by Commutation Type (Tracked, Wheeled, Legged, Hybrid)," the market valuation of UGVs will reach $7 billion by 2026.