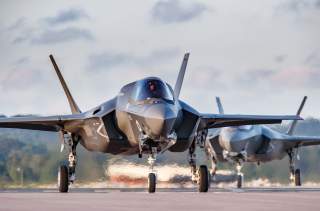 Taiwan has support for this from some members of Congress, which has traditionally been more pro-Taiwan than the executive branch. In a letter addressed to Trump on March 26, Sen. John Cornyn and Sen. James Inhofe urged the president to sell Taiwan the F-35B fighter jets. If that could not be arranged, then Cornyn and Inhofe that said Washington should sell Taipei the F-16V.

Taiwan’s Defense Minister has revealed that his country is engaged in negotiations with the United States to acquire the F-35 Joint Strike Fighter.

During an interview with the local Liberty Times, Minister of National Defense Yen Teh-fa was asked whether Taiwan has officially asked the United States to sell it F-35 jets and M1 tanks. In discussing the former, Yen stated “I can confirm that negotiations are ongoing.” His remarks were reported in English by the Taipei Times, a sister publication of the Liberty Times.

Yen later clarified his response. “To answer the question as to whether we have formally requested the F-35 from the U.S., although we have been holding dialogues with U.S. officials, they have not reached a definitive conclusion,” he said. “U.S. officials are evaluating it, and they might have their own concerns over its high cost or other considerations.” Thus, it sounds like Taiwan has not officially requested F-35s yet, but intends to do so if the United States seems open to selling the fighter jet to the island nation.

Taiwan has reportedly been interested in purchasing the F-35B variant of the plane. That is the Marine Corps version that has a short take-off and vertical landing (STOVL) capability. Yen alluded to the importance of that during the interview, telling the Liberty Times that “the air force’s operational requirements dictate that the next generation of fighters must possess stealth characteristics, be short take-off capable and be able to fight beyond visual range.” The F-35B meets all of these requirements.

Having a STOVL fixed-wing fighter jet makes sense when one considers that China has some 1,500 ballistic missiles pointed at Taiwan at all times. And, according to a study done by the RAND Corporation, Beijing would only need 155 ballistic missiles to destroy all the Taiwanese runways that are long enough to launch normal fighter jets. By contrast, a short-takeoff and vertical-landing fighter like the F-35B could disperse quickly in the event of a war with China. This would prevent them from being destroyed on the ground. The F-35Bs could also operate from shorter, commercial air strips or other areas in Taiwan if its military airstripes were destroyed in the opening salvos in a war.

Taiwan’s interest in the F-35B dates back at least fifteen years. Around 2002, Taiwan sent the Pentagon a “request for letter of intent (LOI) and for price and availability (P&A) data on the F-35B signed by Wang Chi-lin, then director of the Defense Procurement Division of the Taipei Economic and Cultural Representative Office (Taiwan’s de facto embassy in Washington).” This interest has only intensified since President Donald Trump took office, perhaps because Taipei believes the current administration is more likely to sell the planes to Taiwan than were its immediate two predecessors. In the spring of 2017, reports emerged that Taiwan intended to officially declare its intention to purchase the jets to U.S. officials. Yen’s comments indicate that Taipei has resisted doing so because America has engaged in ongoing, quiet negotiations over the F-35B. Still, in March of this year Yen reiterated Taiwan’s interest in the F-35B and said the issue had been “raised with the U.S.”

Taiwan has support for this from some members of Congress, which has traditionally been more pro-Taiwan than the executive branch. In a letter addressed to Trump on March 26, Sen. John Cornyn and Sen. James Inhofe urged the president to sell Taiwan the F-35B fighter jets. If that could not be arranged, then Cornyn and Inhofe that said Washington should sell Taipei the F-16V.

Taiwan’s current Air Force fighters consist primarily of F-CK-1s, F-16s and Mirage 2000s. The AIDC F-CK-1 Ching-kuo is an indigenously built fighter that first joined the force in 1989. Taiwan eventually built 130 F-CK-1s and has been modernizing some of these in recent years. In the 1990s, the United States agreed to sell Taiwan 150 F-16A/B Block 20 fighters. During the Obama administration, Taiwan requested to buy sixty-six new F-16C/D fighter jets from Washington, but America demurred. Instead, the United States is helping Taiwan upgrade its existing fleet of F-16s, said to be around 140 jets, to meet the F-16V standard. Taipei also purchased sixty Mirage 2000s from France in the late 1990s. Fifty-five of these are left, and Taipei has explored modernizing and expanding the life of these planes. There has also been talk about building a new indigenous fighter jet.

Meanwhile, China’s Air Force is rapidly modernizing. For starters, China has unveiled what is supposed to be its first fifth-generation fighter jet, the J-20. In February of this year, Beijing declared that its first batch of J-20s had attained initial operational capability. Although there are questions about how stealthy the J-20 is with its current engines, the J-20 still represents an increase in Chinese air power. In addition, Beijing has taken delivery of Russia’s most advanced fighter jet, the Su-35. It has already been using this plane to intimidate Taiwan, with a flyover of the island nation on May 11.