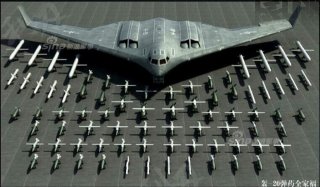 China’s emerging “B-2 copycat” H-20 stealth bomber is expected to introduce an entirely new sphere of threat dynamics to the U.S., as it further cements China’s nuclear triad and massively extends its nuclear attack range to include major portions of the continental U.S.

The new H-20 bomber,  likely to formally arrive in a matter of months, reportedly has a range of up to 7,500 miles according to the UK’s Sun, making it possible for a single sortie from mainland China to reach targets over the U.S. without needing to refuel. This is a substantial development, as refuelers can of course help reveal the position or presence of a stealth bomber, and uninterrupted stealth bomber attack missions with that kind of reach raise the possibility of undetected nuclear attack upon major U.S. targets.

An essay in the Asia Times states the following:  “According to the South China Morning Post, which cited a London-based Royal United Services Institute for Defence and Security Studies report, the state-of-the-art H-20 can carry a massive weapons payload of 45 tonnes and fly great distances without mid-air refuelling.”

While the exact composition of its stealth properties or radar-signature reducing technologies may not be fully known, available photos and renderings reveal an aircraft which one could say seems in some respects to be indistinguishable from a U.S. B-2. There is nothing surprising about this, given China’s well known and well-documented habit of stealing or copying U.S. weapons designs, it seems particularly apparent in the case of the H-20. It features a similar rounded upper fuselage, blended wing body, curved upper air inlets and essentially no vertical structures.  There appears to be a fair amount of evidence, simply available to the naked eye, to demonstrate China’s overt “copycat” maneuver.

The B-2 is known for its long-endurance flights as well; during Operation Enduring Freedom in the opening days of the Afghan war, U.S. B-2 flew 44-hour missions from Whiteman AFB, Miss., to Diego Garcia, a small island off of the Indian coastline. From there, B-2s flew bombing missions over Afghanistan in support of U.S. ground forces.

While this mission likely required refueling, it does speak to the merits and tactical advantages of long-endurance bombing.

It is also not clear if the H-20 could succeed in rivaling a U.S. B-2 given the extent of upgrades and adaptations the Air Force has undertaken with the 1980s platform. The B-2 will soon have air-defense evading Defensive Management Systems sensors, a thousand-fold faster computer processor and weapons upgrades to include an ability to drop the B-61 Mod12 nuclear bomb.  The B-2, which is expected to fly alongside the new B-21 until sufficient numbers of B-21s arrive, will be a much different plane in a few years when compared to its 1980s origins, as the Pentagon hopes to ensure the platform remains relevant and powerful for many years into the future.