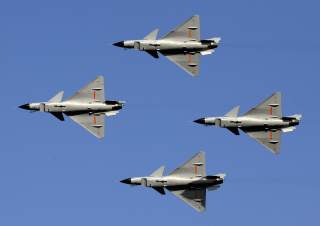 In a surprise move, the Chinese People’s Liberation Army Air Force (PLAAF) has debuted a specially modified iteration of their Chengdu J-10 fighter jet at the 2018 Zhuhai Airshow. An update over the original J-10 “Vigorous Dragon” and its J-10B variant, the J-10 Thrust Vectoring Control, or TVC, comes equipped with a hinged thrust-vectoring nozzle. The engine in traditional aviation systems is always pointed forward, which can only propel the body in a fixed direction. By contrast, modern thrust vectoring control systems have movable thrust nozzles that allow jets to control the direction of their exhaust. TVC aircraft can, therefore, propel themselves in multiple directions as opposed to only forward, which should translate into vast improvements in maneuverability and low-speed handling.

No other Chinese aircraft, including the latest J-10C and even its markedly more expensive successor the J-20, currently use this technology. The J-10 joins the Su-30, Su-35, Su-57, and F-22 as one of the few fighter jets to integrate a thrust-vectoring nozzle, but not all TVC systems are created equal. For instance, the F-22 Raptor can only vector up and down by twenty-four degrees, whereas the Su-35 and J-10 TVC boast a “3-D” TVC engine that can thrust up and down as well as left and right.

Recent footage of the J-10 TVC in action demonstrates some of the real-world capabilities of thrust vectoring control. The jet successfully performed Pugachev’s Cobra, a technically demanding aerobatic maneuver that involves a jet lifting its nose slightly above 90 degrees and then all the way back down to horizontality. The J-10 TVC also executed the Falling Leaf maneuver, in which the pilot swings the aircraft back and forth in a series of full stalls.

Nonetheless, the fact that the J-10 TVC is powered by China’s domestically-produced WS-10B3 turbofan engine has been taken by some as an indication that China has successfully reverse engineered the Su-35’s AL-41F1S engine. If so, Beijing’s recent purchase of 10 Su-35’s from Russia may prove to be its last. In light of the performance and cost issues plaguing the WS-15 engines in China’s flagship J-20 fighter, experts have observed that the J-10 TVC is not so much a final product as a likely stepping stone for the eventual integration of 3-D TVC engines into the J-20. Chinese development of a reliable domestic jet engine would also be a major step in shoring up what some Chinese observers see as the long-term political risk of an over-reliance on Russian military hardware. For instance, a Chinese military insider succinctly conveyed this anxiety to the South China Morning Post, saying “China has friendly relations with Russia right now, but what would Beijing do if the two countries fell out, or if Moscow was at war with another country?”