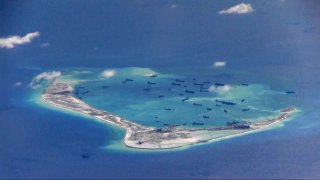 China and the Philippines are presently at loggerheads over 200 Chinese ships that are currently parked in the South China Sea.

According to The BBC, the Philippines government has asked China to withdraw the ships, which Manila says are “encroaching upon its territorial waters in the South China Sea.”

The ships are nominally fishing boats, but the Philippines claim the boats are in fact crewed by China's maritime militia.

“We view with grave concern the presence of 220 Chinese militia boats in the Julian Felipe Reef (internationally known as Whitsun Reef, located within Union Reefs) in the West Philippine Sea,”  Delfin Lorenzana, The Philippines’ Secretary of National Defense, said of the dispute, in an English-language Facebook post.

“This is a clear provocative action of militarizing the area. These are territories well within Philippine Exclusive Economic Zone (EEZ) and Continental Shelf (CS) where Filipinos have the sole right to resources under international law and the 2016 arbitral ruling.”

"We call on the Chinese to stop this incursion and immediately recall these boats violating our maritime rights and encroaching into our sovereign territory,” he said.

The defense minister added that his ministry is coordinating with the Philippine Coast Guard, the National Task Force for the West Philippine Sea and the Department of Foreign Affairs on next steps for dealing with the issue.

Another report by NPR stated that the boats were observed March 7 at the Whitsun Reef, about 200 miles west of Palawan island.

The commander of the Phillippines’ armed forces, Marine Maj. Gen. Edgard Arevalo said the military "will not renege from our commitment to protect and defend our maritime interest within the bounds of the law,"  per NPR.

It’s part of a continuing tendency in which countries in that part of the world have fought with China over the rights to the South China Sea. An international court, in 2016, ruled against China’s claims over 90 percent of that sea, the BBC said, although China has refused to accept that ruling.

We reported last October that the Philippines has had a rough go of it during the coronavirus pandemic, with President Rodrigo Duterte’s authoritarian tendencies proving a poor fit for the moment.

“Large portions of the urban population live in cramped shanty towns and are daily wage earners, so work-from-home arrangements and social distancing are luxuries many simply cannot afford,” we wrote at the time. “Despite imposing one of the world’s strictest lockdowns in March, the Philippines has over 345,000 cases — by far the most in Southeast Asia.”

Later, a group of doctors cautioned against a quick reopening amid the pandemic, at which point Duterte “dared the doctors to mount an uprising against him.”

As of last August, Duterte was in line to receive Russia’s Sputnik coronavirus vaccine.