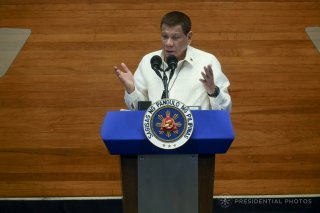 Philippine president Rodrigo Duterte may receive a shot of Russia’s coronavirus vaccine as early as May 2021, according to the government’s official newswire.

Earlier in the week, Duterte volunteered to participate in trials for Russia’s vaccine, known as “Sputnik V,” which has only undergone rapid Phase 1 and Phase 2 clinical trials on a small number of individuals.

On Tuesday, Russia announced that its vaccine had been approved by its health regulators—making it the world’s first coronavirus vaccine to be registered. Large-scale production of the vaccine, perhaps up to five million doses a month, is slated to begin in September, with mass vaccinations starting in October.

Due to the speed at which the vaccine was green-lighted, medical experts around the world have voiced their concerns regarding its safety and efficacy.

White House coronavirus advisor Dr. Anthony Fauci said Tuesday that he hoped “the Russians have actually definitively proven that the vaccine is safe and effective.”

The infectious disease expert added: I seriously doubt that they’ve done that.

Duterte, however, largely dismissed those concerns.

“I will tell President (Vladimir) Putin that I have huge trust in your studies in combating COVID and I believe that the vaccine that you have produced is really good for humanity,” Duterte said during a televised interview on Monday, according to Reuters.

The Philippines is now among a handful of countries that will participate in a more extensive Phase 3 trial for the vaccine, which could start as soon as October. Russia is expected to fund the clinical trial.

To help mollify public fears, Duterte offered to be a “guinea pig” when the vaccine arrives in the country.

“I can be the first they can experiment on,” he said.

Duterte’s spokesman Harry Roque noted Thursday that Russia’s vaccine will likely receive approval from the Philippines’ Food and Drug Administration by April next year. Then Russia will share the technology to help enable the Philippines to locally manufacture the vaccine.

In July, it was reported that Duterte made a plea to his Chinese counterpart to make the Philippines a top priority if it develops a vaccine.

Last week, the Philippines eclipsed Indonesia for having the highest number of coronavirus cases in Southeast Asia. According to the latest data from Johns Hopkins University, the country has more than 147,000 infections and 2,400 related deaths.