Russia Wary of “Information Warfare” Against Its Coronavirus Vaccine 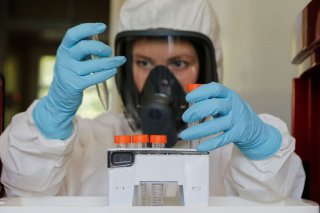 Russia has doubled down on its claim that its coronavirus vaccine is both safe and effective.

On Tuesday, the country announced that its vaccine had been approved by its health regulators—making it the world’s first coronavirus vaccine to be registered.

However, as the vaccine had only undergone rapid Phase 1 and 2 clinical trials on a small number of individuals, medical experts around the world have voiced their concerns regarding its safety and efficacy.

Russian Health Minister Mikhail Murashko said Wednesday that allegations that the vaccine was unsafe were “groundless.”

“It seems our foreign colleagues are sensing the specific competitive advantages of the Russian drug and are trying to express opinions that in our opinion are completely groundless,” Murashko was quoted as saying by Reuters.

The comment was supported by Kirill Dmitriev, the chief executive of Russia’s sovereign wealth fund RDIF, which is backing the vaccine that has been named “Sputnik V.”

“It (the vaccine announcement) really divided the world into those countries that think it’s great news … and some of the U.S. media and some U.S. people who actually wage major information warfare on the Russian vaccine,” he said during an interview Wednesday on CNBC’s “Squawk Box Europe.”

“We were not expecting anything else, we are not trying to convince the U.S. Our point to the world is that we have this technology, it can be available in your country in November/December if that works with your regulator … (while) people who are very skeptical will not have this vaccine and we wish them good luck in developing theirs.”

Dmitriev, though, admitted that Russia needs to eventually share the scientific data behind the vaccine.

“We agree that nothing in detail has been published yet, we are just sending some information to some of our partners today on the results of the first phases of the clinical trials and it will all be published in August,” he said.

White House coronavirus advisor Dr. Anthony Fauci said Tuesday that he hoped “the Russians have actually definitively proven that the vaccine is safe and effective.”

There are now more than 20.4 million confirmed cases of coronavirus worldwide, including at least 745,000 deaths, according to the latest data from Johns Hopkins University.