China's Massive Military Parade Was A Stern Warning To The World 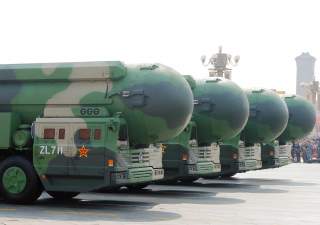 Since the founding of the People’s Republic of China (PRC) 70 years ago, the country under the leadership of the Communist Party of China (CPC) has had its fair share of successes and failures. After a great start that in the 50s saw the Chinese peasantry break free from the yoke of serfdom and the establishment of a communist equalitarian society, came the disastrous Great Leap Forward in the 60s and the Cultural Revolution in the 70s. Two decades of indisputable failures by CPC to deliver on its promise to establish a prosperous society.

In the late 70s, Deng Xiaoping’s introduced the “Open Door” policy that brought economic growth and prosperity to China. This economic growth has been the driving force behind the continuous development of the country’s infrastructure, education and healthcare systems. Today, the large majority of Chinese enjoy a level of living standards that they could not have dreamed of just a generation ago. A World Bank report shows that since market reforms were introduced 40 years ago, around 850 million Chinese were lifted out of poverty. This near-miraculous achievement is the result of the hard work of the Chinese people and the effective leadership of the CPC. Together, they have turned poverty-stricken dysfunctional China into a prosperous and powerful country.

The socio-economic improvements can be seen in every domain. While in the late 70s access to higher education and proper healthcare was the privilege of a few, today most Chinese have access to them. As for the working conditions, in the 80s they were often extenuating and hazardous, and the average Chinese would only be poorly remunerated. Today, most Chinese enjoy good working conditions and income. And, while in the 80s freedom of movement was practically inexistent because of bureaucratic barriers and substandard infrastructure, today Chinese enjoy freedom of movement and a state of the art road, rail, and air infrastructures.

Internationally, the PRC has made significant progress too. It went from being a minor player in the 70s to a dominant one today. China has been able to develop increasingly strong economic relations with almost every other country in the world, making it the largest contributor to economic growth in the developing world. China has the capacity and is willing to invest in infrastructure in almost every country in the world, including in those countries where no one else is willing to do so. Countries such as in Pakistan and Angola would be hopeless without China’s investment. Moreover, China’s relations with most countries are mutually beneficial and respectful. The CPC claims that it uses its newly acquired global influence to promote peaceful development and, as put by President Xi, build an “international community with a shared destiny for mankind.”

In summary, there is a long list of domestic and international achievements that the PRC and the CPC could have proudly showcased to celebrate its 70th anniversary.

Why then did the CPC choose to focus only on showcasing its massive military might? The domestic message was clear: The CPC is powerful, Chinese people are in good hands and can be proud of their leadership and country.

As for its international message, the CPC wanted to send a stern warning to dissenters in Hong Kong and Taiwan, and to international actors challenging the PRC in general. This warning is explicitly in Xinhua’s central headline for this event: “Xi says no force can ever undermine China's status.” And as for the CPC’s willingness (or should I say eagerness) to go to war over any significant disagreements, the Chinese defense minister words are explicit: “Fight? We are ready. China will not be bullied.”

Hong Kong citizens should realize that they cannot rely on the ‘one country, two systems’ policy. Since before the founding of the PRC, the CPC has followed a well-known Machiavellian strategy: “The promise given was a necessity of the past: the word broken is a necessity of the present.” To gain the support of ethnic minorities in the war against the Nationalists, Mao Zedong assured them that they would be allowed to choose between joining the new China or establishing independent states. Just after the success of the communist revolution, he retracted his promise and forced them to join the PRC. Or the case of China’s handling of territorial disputes in the South China Sea (SCS), which initially was cloaked under a friendly and cooperative disguise.  Now that China has built and consolidated its military bases in the region, there is almost no space for negotiation left because China argues that its territorial rights in the SCS are indisputable and that it is willing to defend them using its far superior military might.

By implementing the “one country, two systems” model, the CPC promised Hong Kong high levels of political, economic and social autonomy. This model is about to be replaced a ‘one country, one system’ model: i.e. the PRC, the CPC. The CPC is just waiting for the right timing (which will come sooner than later) to enforce a change that will result in CPC’s full supervision of Hongkongers’ political, economic, cultural, and social lives.

The CPC’s desire to control everything and everyone is rooted in the fact that to ensure its own survival it needs to preserve China’s prosperity, which, in turn, depends on keeping domestic sociopolitical stability. To achieve stability, the CPC thinks that it needs to homogenize the multi-cultural and multi-ethnic Chinese family. Hence, it cannot allow any kind of significant dissent or diversity within China. Currently, the most obvious of these social homogenization processes is the forceful assimilation of Uyghurs in Xinjiang. They are seeing how their cultural and religious rights enshrined in the Constitution of China are drastically and swiftly eroded.

Unfortunately for dissenting Hongkongers, they cannot realistically expect any fate other than being forcefully assimilated into the Han Chinese communist family. If they resist, the CPC has warned them that it is willing to use brute force to do so.

For the PRC’s 70th anniversary celebrations, the CPC could have been an opportunity to showcase the fact that 850 million people have been lifted out of poverty, or that China enjoys state-of-the-art infrastructure and healthcare and education systems. For its international audience, it could have showcased its successful promotion of peaceful development and strife to build an “international community with a shared destiny for mankind.”

Instead, the CPC chose to showcase its military might with a massive and meticulously planned military parade and accompanied it by President Xi’s assertive and bellicose discourse. It seems that the time for preaching peaceful and harmonious development and relations is over. Time is ripe for the CPC to forcefully homogenize China and impose its will internationally. And Hong Kong and Taiwan cannot expect to be spared.

Patrik K. Meyer holds a PhD in International Studies from the University of Cambridge and is currently a New America Security Fellow.