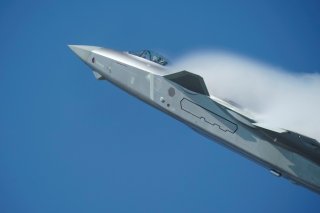 China’s answer to the likes of the F-22 Raptor stealth fighter jet, the Chengdu J-20 is the People’s Liberation Army Air Force’s (PLAAF’s) most advanced fighter jet to date.

The J-20 emerged from a 1990’s Chinese program to develop a fifth-generation fighter. The program’s early development efforts are a continued source of speculation, with vague reports of early concept fighters that may or may not have been directly related to the project. The first J-20 prototype emerged in 2010 and undertook its first flight test in the following year.

The J-20 “Mighty Dragon” is a single-seat, twin-engine, fifth-generation fighter. Boasting an elongated fuselage with a dual-wing configuration, the J-20 appears to be somewhat larger than its F-22 and F-35 counterparts. The fighter is believed to support a maximum speed of up to Mach 2.5, with a range of around 5,500 km. But, as previously noted by The National Interest’s Kris Osborn, a fighter’s “top speed” does not necessarily translate into sustained speeds. Despite the claims of Chinese defense observers, it is not clear if the J-20 can supercruise—that is, sustain supersonic flight without the use of stealth-compromising afterburners. Part of the confusion over the J-20’s precise aerodynamic performance stems from ongoing engineering difficulties surrounding the fighter’s engine. The J-20 requires its bespoke Xian WS-15 engines to support any degree of supercruise capability, but performance and reliability difficulties compelled the People's Liberation Army Air Force (PLAAF) to accept the initial batches of serial J-20 fighters with stopgap WS-10C and Russian AL-31F engines instead. The current status of the WS-15 engine is unclear, with reports suggesting that it is still under development and could be completed by 2023.

The J-20 is commonly described as a stealth air superiority fighter with secondary precision strike capabilities. The fighter supports a versatile suite of air-to-air weapons, including PL-10 and PL-12 missiles that fill the short and medium-range engagements respectively. But the J-20 seems more suited for engaging aircraft at longer ranges with its formidable PL-15 and PL-21 missiles. The ramjet-powered, hypersonic, beyond-visual-range (BVR) PL-21–which is roughly comparable to the Russian R-37M missile that will reportedly be supported by the Su-57–can feasibly hold high-value aerial targets at risk and is a potent addition to China’s air power arsenal. The fighter carries its payload in internal weapons bays, consistent with its long-range, stealthy air-to-air mission purpose. The fighter likewise boasts four external hardpoints, which are believed to be primarily used for transporting fuel tanks during non-combat missions.

A twin-seat J-20 variant was spotted several months ago in PLAAF promotional materials. Chinese state media reports that the two-seater is intended to be used for dedicated drone control, bombing missions, and electronic warfare, but there are currently no concrete production and delivery timelines for this version of the fighter.

As of the summer of 2021, it is estimated that around forty to eighty J-20 fighters have been produced. Prominent People's Liberation Army watchers have suggested that the PLAAF seeks 200 serial J-20’s by 2027, rivaling the U.S. F-22 fleet in quantity if not in quality, but only time will tell how closely this early projection will correspond to China’s production output over the coming years.