F-22 Raptor: Why Did the U.S. Military Cut Back the Ultimate Fighter? 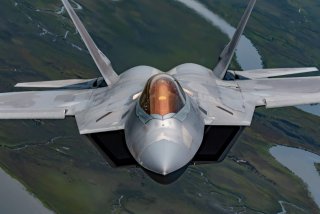 When the F-22 program was trimmed down to 187 aircraft in what appeared to be an abrupt and potentially inexplicable shift, the U.S. Air Force placed itself at much greater risk.

The year was 2004, a time now known as the height of the War on Terror, and decisionmakers may have lacked the vision to recognize that great-power threats would not fully disappear.

While reasons for such a cut can include many variables and be tough to fully discern, one possible reason may simply have been that military planners and congressional appropriators may have simply misread the evolving global threat circumstance and embraced too much of a short-term view.

In 2004, just following Operation Iraqi Freedom, the United States was immersed in the throes of an intense counterinsurgency war in Iraq and Afghanistan, a conflict in which air supremacy was completely established. Therefore, simply put, F-22 jets were not needed at that particular time, and terrorist-inspired or terrorist-aligned insurgencies appeared likely to persist as an ongoing threat for years into the future. That may have been true and may still be true, however, the future warfare planning vision of weapons developers at the time may have been much too narrowly focused and simply lost sight of any kind of large-scale great-power warfare threat context.

Years ago, warfare futurists may have underestimated or not fully anticipated the seriousness of the emerging great-power threats. This is a possibility given that the nation and its military were understandably distracted by wars in Iraq and Afghanistan. In subsequent years, particularly following the F-22 jet’s combat debut against the Islamic State in 2014, demand for the F-22 jet skyrocketed but there were not enough of them available.

The demand for F-22 jets was so great that the Defense Department and Congress came very close to restarting an F-22 production line—an idea that was ultimately dropped for budgetary reasons. In the years following the 2004 cut, there was widespread consensus among many Air Force leaders, military strategists and lawmakers that restarting the production line may have been a huge mistake. The rapid ascent of the current sixth-generation Air Force stealth fighter may be an indication that weapons developers want to ensure that the right lessons were learned from the premature cut to the F-22 program.