China's Military Deserves America's Respect, But Not Its Fear 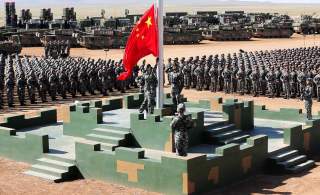 Key point: China's military is advancing rapidly, but it is still plagued by corruption and discipline problems.

The 2019 white paper (the last one was in 2015) lays out general principles of China’s defense policy. It avows the new face of the People’s Liberation Army (PLA). Cyberwarfare, more flexible command and control, long-range naval operations. Change the names and numbers, and you could be forgiven for thinking this was a planning document from the U.S. military or an American thinktank.

But before we fear the onslaught of the Dragon, take a look at the problems that the white paper says China’s military must solve.

The most glaring is corruption, which has led to numerous senior officers being punished for crimes such as selling promotions. “China’s armed forces are tightening political discipline and rules, investigating and dealing strictly with grave violations of CPC discipline and state laws,” the white paper says. “China’s armed forces punish corruption in strict accordance with CPC [Communist Party] discipline and relevant laws, and rectify any malpractice in key construction projects and the procurement of equipment and material...They have worked to implement full-spectrum audit, intensify the audit of major fields, projects and funds, and perform strict audits over the economic liabilities of officers in positions of leadership. Active efforts have been made to monitor the cost-effectiveness of applied funds, conduct whole-process audit, and combine civil and military efforts in auditing.”

The U.S. military has no shortage of faults. Careerism, inflated prices for military equipment, weapons that don’t work as advertised, the revolving door between the Pentagon and the defense industry. Nonetheless, it is hard to imagine the Pentagon having to cite corruption as a major impediment to military efficiency.

The U.S. military also has its share of discipline problems, such as Alcohol abuse, and sexual harassment that has derailed the careers of several senior officers. But these pale compared to the discipline problems that worry the Chinese military:

“China’s armed forces are building a military legal system with Chinese characteristics and pressing ahead with a fundamental transformation in how the military is run...They are promoting legal awareness through public communication and education campaigns, establishing and improving the support mechanism of legal consultation and service, and advancing law-based management in the military. China’s armed forces are striving to manage the troops more strictly in all respects. They have fully implemented military rules and regulations, restored and improved the traditional mechanism of using bugles to communicate and command, carried out safety inspections to identify and tackle potential problems, stepped up garrison military policing, strengthened the management of military vehicles by targeted measures, and set up a mechanism of regular notification on garrison military policing.”

There was nothing truly surprising in the white paper. It’s no secret that China has been moving away from a huge, low-tech peasant military to a smaller, more agile and high-tech force. Still, there is plenty in the paper to disturb the West as well as China’s Asian neighbors. China will continue to replace older aircraft and ships with more advanced models.  It is setting its eyes on distant horizons: the PLA will “address deficiencies in overseas operations and support, builds far seas forces, develops overseas logistical facilities, and enhances capabilities in accomplishing diversified military tasks.”

And the Chinese military still has its eyes on Taiwan. “China has the firm resolve and the ability to safeguard national sovereignty and territorial integrity, and will never allow the secession of any part of its territory by anyone, any organization or any political party by any means at any time,” the white paper says. “We make no promise to renounce the use of force, and reserve the option of taking all necessary measures. This is by no means targeted at our compatriots in Taiwan, but at the interference of external forces and the very small number of “Taiwan independence” separatists and their activities. The PLA will resolutely defeat anyone attempting to separate Taiwan from China and safeguard national unity at all costs.”

Nonetheless, behind the curtain of hypersonic missiles and stealth fighters, is a military that worries about corruption and discipline. The Chinese military is to be respected, but not to be feared.

Michael Peck is a contributing writer for the National Interest. He can be found on Twitter and Facebook. (his article was originally published last month and is being republished due to reader interest.