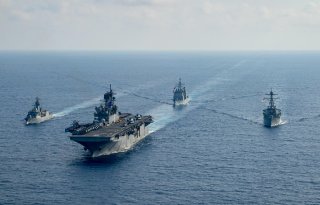 China is fast-building destroyers, amphibious ships, carriers, nuclear-armed submarines and fast-attack boats along with many other naval platforms as part of a visible effort to dominate the regional and international seas and, according to a recently released U.S. strategy, “displace the United States as the preferred partner in countries around the world.”

The Navy, Marine Corps and U.S. Coast Guard have a new strategy document, called  “Advantage at Sea,” which takes a hard line on Chinese expansionism and details a number of what it describes as aggressive Chinese ambitions intended to “corrode international maritime governance, deny access to traditional logistical hubs, inhibit freedom of the seas, control use of key chokepoints and deter U.S. engagement in regional disputes.”

The sheer numbers of ships, and perhaps most notably the pace at which they are being added, is considered alarming to many Pentagon weapons planners who consistently call for a five-hundred-ship fleet U.S. Navy. China’s Navy is well known to already be larger than the United States, and the country is leveraging its large domestic industrial capacity and shipbuilding ability.

“This rapid growth is enabled by a robust shipbuilding infrastructure, including multiple shipyards that exceed those in the United States in both size and throughput. In conflict, excess PRC industrial capacity, including additional commercial shipyards, could quickly be turned toward military production and repair, further increasing China’s ability to generate new military forces,” the strategy states.

China’s Navy, the strategy explains, has nearly “tripled” in size over just the last two decades, and the People’s Liberation Army Navy plans to operate as many as five carriers, double its fleet of destroyers and add new high-tech, heavily armed warships, amphibs and coastal patrol boats, among other things.

All of these factors, the strategy explains, are fundamental to China’s massive ambition to emerge as the preeminent global power through military modernization and what some have termed a kind of economic imperialism. The strategy explains this as “predatory lending” and visible attempts to control access to strategic maritime locations. Chinese expansionism is particularly apparent in Africa where the country has built a new military base near the U.S. facility in Djibouti and also engaged in controlling financial initiatives with many African nations to gain an unprecedented economic foothold and ability to control business throughout the continent.

“China has implemented a strategy and revisionist approach that aims at the heart of the United States’ maritime power. . . . China’s One Belt One Road initiative is extending its overseas logistics and basing infrastructure that will enable its forces to operate farther from its shores than ever before, including the polar regions, Indian Ocean, and Atlantic Ocean,” the strategy states.