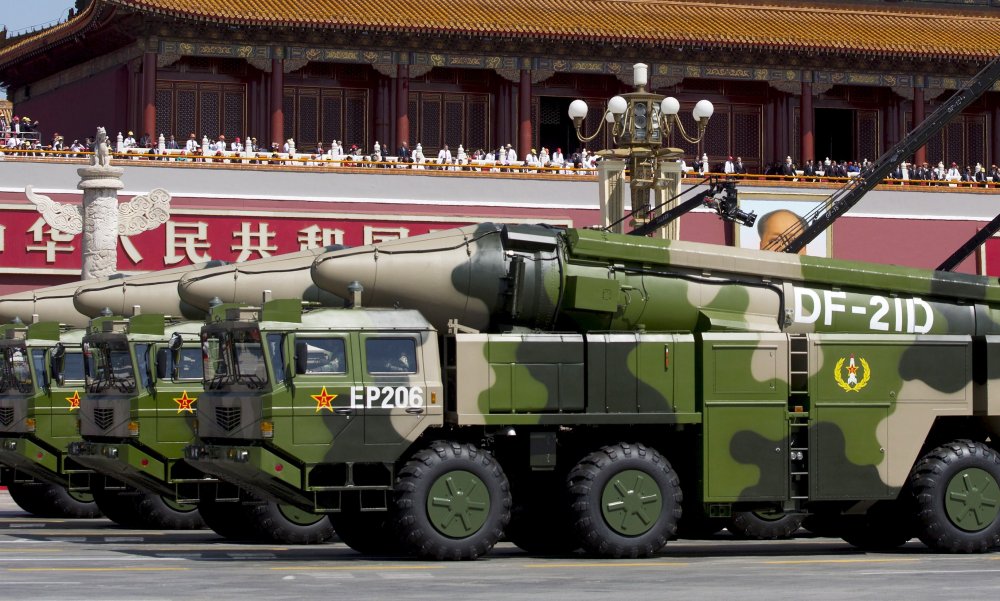 The Trump administration is likely to withdraw from a 1987 treaty between the United States and Russia that banned intermediate-range missiles.

The move has triggered alarm in Moscow and in the capitals of U.S. allies in Europe. One objector is more surprising. China.

Beijing is not a signatory to the Intermediate-range Nuclear Forces treaty, or INF. Chinese officials and even a few officials in the U.S. administration believe the treaty constrains the United States while allowing China the freedom to develop mid-range missiles.

That's a bad reading of the treaty and its effects, experts argued.

The treaty compelled both countries to eliminate all ground-launched ballistic and cruise missiles with ranges between 310 and 3,400 miles. For much of the Cold War, the Soviets and Americans each deployed hundreds of these intermediate-range nukes in Europe.

INF's implementation and other factors contributed to a steep drop in the size of the American Soviet nuclear arsenals.

Then in 2014, the U.S. State Department accused Moscow of violating the treaty by testing a new ground-launched cruise missile. The Kremlin insisted the new missile fell outside the agreement's range restrictions, but American officials were skeptical.

Pres. Barack Obama declined to pull America out of the INF Treaty, but his successor Donald Trump felt no such compunction. In December 2018, Secretary of State Pompeo said Russia had 60 days to come back into compliance with the treaty. A meeting between U.S. and Russian officials in January 2019 ended in impasse.

Beside alleged Russian intransigence, the Trump administration cited China as a second reason for the United States to quit the INF Treaty. "Some U.S. analysts and officials argue the United States should withdraw from the Intermediate Nuclear Forces Treaty because it prevents the United States from responding to China’s deployed short- and intermediate-range ground-based missiles," explained Gregory Kulacki, a nuclear-weapons expert with the Massachusetts-based Union of Concerned Scientists.

"They argue the United States should abandon a bilateral arms control agreement intended to prevent Russia from threatening Western Europe to make it easier for the United States to threaten China," Kulacki added.

To be sure, China possesses a lot of missiles. "Since the mid-1990s, Beijing has built up the world’s largest and most diverse arsenal of ground-launched missiles," the U.S.-China Economic and Security Review Commission reported.

"China’s inventory contains more than 2,000 ballistic and cruise missiles, approximately 95 percent of which, according to U.S. officials, would violate the INF Treaty if China were a signatory," the commission added.

"Both the nuclear and conventional missiles in China’s inventory that would be subject to INF Treaty restrictions are foundational to Beijing’s overall military strategy—namely, to hold U.S. forces at risk should they choose to intervene in a regional conflict—although the conventional missiles pose a more consequential problem for U.S. and allied military power in Asia," according to the commission.

"A small percentage of China’s missiles make up one leg of its small but growing nuclear deterrent force," the commission conceded. "Experts at the Nuclear Information Project with the Federation of American Scientists estimate that China possesses approximately 120 nuclear-capable land-based missiles that can carry 186 of China’s total stockpile of nuclear warheads, although the majority of those missiles are ICBMs and would not be constrained by the INF Treaty."

Likewise, the U.S. military already has developed novel ways of matching China's missile arsenal. The sea-launched Tomahawk missile and air-launched JASSM-ER missile are not subject to the INF, explained Matt Korda and Hans Kristensen, nuclear-weapons experts with the Federation of American Scientists. The Pentagon possesses thousands of Tomahawks and JASSMs.

"There are no military requirements we cannot currently satisfy due to our compliance with the INF Treaty," U.S. Air Force general Paul Selva, the vice chairman of the Joint Chiefs of Staff, told Congress in 2017.

In other words, the INF Treaty hasn't prevented the U.S. military from maintaining an overwhelming advantage over the People's Liberation Army. Scrapping INF won't necessarily help the United States to expand its military lead any more than staying in the treaty limited America's power relative to China.

The United States quitting the INF Treaty likely will not alter the balance of power between America and China. But it could destabilize Europe by freeing up Russia and the United States to field new ground-launched nukes without any legal framework for limiting such deployments.

The Trump administration's policies "only increase the chances of blundering into a nuclear war," warned Bruce Blair, a Princeton University nuclear scholar.