China's Navy Could Soon Have an Aircraft Carrier Battle Group 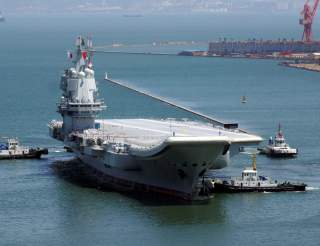 “A ship researcher from the Navy who asked not to be named said he expected the second sea trial to mainly verify the carrier's communication, navigation and other electronic and mechanical instruments,” the Chinese state-owned People’s Daily reported on August 27. “He also said the operation will test modifications and improvements on the ship's propulsion system that were made after the first sea trial.”

The People’s Daily report—which was also republished by the People’s Liberation Army sponsored China Mil site—also noted that the new aircraft carrier will require several sea trials before being commissioned into service by the PLAN. But Shandong is only a stepping-stone, China’s follow-on carriers will be far more capable.

“China’s first domestic aircraft carrier was launched in 2017 and will likely join the fleet by 2019,” states the Pentagon’s 2018 report to Congress on Chinese military capabilities. “The new carrier is a modified version of Liaoning, but is similarly limited in its capabilities due to its lack of catapult and a smaller flight deck than U.S. carriers. However, China is expected to begin construction on its first catapult-capable carrier in 2018, which will enable additional fighter aircraft, fixed-wing early-warning aircraft, and more rapid flight operations.”

In addition to Shandong going to sea for its second sea set of trials, the Type 055 destroyer Nanchang also started its sea trials earlier this month after it was launched in June. “The first of China's Type 055-class guided-missile destroyers－Asia's largest and mightiest noncarrier warship－also started its first sea trial on Friday from Jiangnan Shipyard in Shanghai,” the People’s Daily reported. “The Type 055 destroyer displaces more than 10,000 tons and has 112 vertical launching cells capable of firing various kinds of missiles, including the nation's long-range land-attack cruise missile.”

China is building at least four of the new Type 055 destroyers to escort its nascent aircraft carrier fleet. The U.S Defense Department expects the Type 055—which the Pentagon refers to as the Renhai-class guided missile cruiser—to be a formidable adversary when it becomes operational in 2019. “The RENHAI CG is a 10,000-ton design that can carry an array of long-range ASCMs [anti-ship cruise missiles] and long-range SAMs [surface-to-air missiles], and will likely be able to launch ASBMs [anti-ship ballistic missiles] and LACMs [land attack cruise missiles] once these weapons are available. The RENHAI CG will be China’s premiere carrier escort for blue-water operations.”

Even without those additional weapons, the Type 055 packs a formidable anti-ship punch. “The LUYANG III class DDG and RENHAI-class CG will be fitted with a variant of China’s newest ASCM, the YJ-18 (290 nm, 537 km),” the report notes. Nor have the Chinese skimped out on the targeting. “The PLAN recognizes that long-range ASCMs require a robust, over-the-horizon targeting capability to realize their full potential. China is investing in reconnaissance, surveillance, command, control, and communications systems at the strategic, operational, and tactical levels to provide high-fidelity targeting information to surface and subsurface launch platforms.”