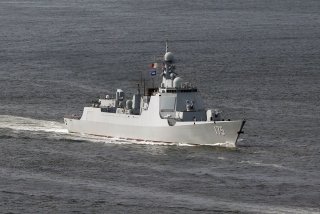 For the past 25 years, the China’s People’s Liberation Army Navy (PLAN) has been steadily modernizing. As a result, it has become a formidable military force within China’s near-seas regions, while it is now able to conduct a number of growing operations in more-distant waters including in the Western Pacific, the Indian Ocean and even in the waters around Europe.

According to a new Congressional Research Service Report released this month, this poses a major challenge to the U.S. Navy’s ability to achieve and maintain wartime control of blue-water ocean areas of the Western Pacific. This is the first such challenge the U.S. Navy has faced since the end of the Cold War, as China’s naval modernization efforts have substantially reduced the U.S. advantage.

The report noted that there are several issues that Congress must take action on, including whether the U.S. Navy is responding appropriately to China’s naval modernization efforts and even if the planned size of the Navy will be appropriate to counter China, while also permitting the Navy to perform other missions, including countering Russian military forces and defending U.S. interests in the Middle East.

In addition, the report questioned whether the U.S. Navy should shift to a more distributed fleet architecture, which could improve the Navy’s ability to avoid and withstand attack from Chinese Anti-Access Area Denial (A2/AD) weapons technology.

Simply put, if current U.S. and Chinese naval capability trend lines do not change, the report warned that China might eventually draw even with or surpass the United States in overall naval capability.

However, the Congressional Research Service Report did not address that China’s naval growth will not be without its own issues.

Zi Yang, a senior analyst of Chinese studies in Singapore, argued in a recent article for The Diplomat that the “invisible threat” to the Chinese PLAN is little different from one of the causes of the fall of the Soviet Union three decades ago: corruption!

Pointedly, China’s naval modernization is far more complex than simple growth and the corruption among the shipbuilders will have lasting consequences for the PLAN. The more money that China invests in shipbuilding the more opportunities for corruption will emerge. The question will be whether Beijing can offer the necessary transparency to fight that corruption.