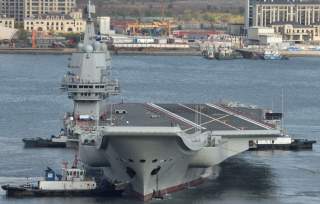 The Chinese navy on Dec. 17, 2019 commissioned into service its second aircraft carrier, Shandong. China’s leader Xi Jinping presided over the commissioning ceremony at a naval base in Sanya, on the southern island of Hainan, the ship’s home port.

With Shandong in service, the Chinese fleet now ties the Royal Navy as the second-biggest operator of carriers capable of operating fixed-wing aircraft. The U.S. Navy, the number-one carrier power, possesses 20 ships capable of launching and recovering airplanes.

But Shandong is far from a perfect ship. Her layout limits her military potential and also puts a cap on the power-projection capabilities of the Chinese fleet. That’s because Shandong merely is a slightly more capacious copy of China’s first carrier Liaoning, a refurbished Ukrainian hull from the 1980s.

Liaoning and Shandong don’t have catapults like the U.S. Navy’s 10 nuclear-powered supercarriers do. Nor does the Chinese fleet operate vertical-landing jump jets like the U.S. fleet does. The Harrier and F-35B jump jets allow the Americans to deploy their 10 big-deck amphibious ships as light carriers.

Instead, the thousand-feet-long Liaoning and Shandong launch their J-15 fighters via a bow-mounted ramp.

The J-15 is a clone of Russia's Su-33 naval fighter. Outwardly, the fighter has a lot in common with U.S., French and British carrier planes. "The J-15 has folding wings, strengthened landing gear, a tailhook under a shortened tail stinger, two-piece slotted flaps, canards and a retractable inflight-refueling probe on the left side of the nose."

The ramp layout probably limits aircraft to a maximum launch weight of 30 tons, a former Chinese navy source revealed. At that weight, a J-15 carrier fighter cannot carry a full load of fuel and weapons, limiting it to brief missions over short distances.

Shandong’s bigger hangars mean she can carry 36 J-15s, versus the 24 Liaoning can carry. Otherwise, the second carrier suffers the same limitations as the first. "Like the Liaoning, the ship lacks cat­apult capabilities and has a smaller flight deck than U.S. carriers," the DIA stated.

Future Chinese carriers could remedy Liaoning's and Shandong's defects, the DIA predicted. A third and bigger flattop is under construction in Shanghai and could enter service in the early 2020s. That vessel will be China’s first cat­apult-capable carrier, “which will enable addi­tional fighter aircraft, fixed-wing early warning aircraft, and more rapid flight operations," according to the DIA.

Until recently, experts expected Beijing to build up a fleet of six aircraft carriers, two for each of the Chinese navy’s regional fleets. Liaoning and Shandong would have stuck to a “regional defense mis­sion" rather than sailing long distances, the DIA claimed.

But in December 2019, the Chinese Communist Party citing technical issues and a slowing economy reportedly put on hold plans for a fifth and possibly sixth carrier. By the late 2020s it's likely the Chinese fleet will possess just four flattops. And only two of them will have catapults and thus fully-capable, well-rounded air wings.

At the same time, the U.S. fleet could possess more than 20 carriers, at least half of which would boast catapults and full air wings.

“More than any other single technology, aircraft carriers enable the American military to project force almost anywhere in the world,” MIT Technology Review explained. In that important measure of military might, China is far behind the United States -- and might never catch up.