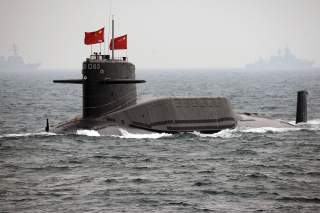 For decades, the United States, Russia, the United Kingdom and France have deployed ballistic missile submarines—or “boomers’’—to quietly patrol along the deep depths of the ocean for months at a time, having no need to surface for air due to their nuclear reactors.

Not once in their sixty-year history have these behemoths ever released their weapons in anger—thankfully, for their principal armament consists of a dozen or more Submarine-Launched Ballistic Missiles (SLBMs) armed with multiple nuclear warheads. Were the boomers to receive the proper signal from their national command authority, they could launch the missiles from underwater into space. Possessing ranges of thousands of miles, the SLBMs would then rain apocalyptic devastation on the major cities and military bases of an adversary.

One reason for the delay is that while Russia and the United States claim they reserve the right to launch a nuclear first strike if sufficiently provoked, both China and India value nuclear weapons as defensive deterrence, and have a no-first-strike policy.

While some will argue such doctrine can be broken at any time, Beijing so far has amassed a much smaller nuclear arsenal reflecting that force posture, and stores warheads separately from delivery systems to underline their second-strike role. An aggressive nuclear posture requires more actively deployed nukes, and more precise ones, to give a good chance of destroying an enemy’s ability to retaliate. By contrast, a defensive “Second Strike” posture only requires enough nuclear weapons to have a few left over after the first strike to wipe out enemy cities in retaliation—and these don’t need to be very precise.

Still, Beijing fears that the United States or Russia might attempt to wipe out most of China’s nuclear missiles in a first strike using its more precise nuclear weapons, and defend against retaliation with new ballistic missile defense systems. However, because nuclear-powered submarines are so stealthy, they are very likely to evade a preemptive strike. An opposing navy might track down and destroy a few them before they released their weapons, but it would be difficult to find and destroy them all. Therefore, Beijing hopes that boomers could ensure that their retaliation capability could survive a first strike.

Developing the technology has posed a challenge, however. Though China began developing SLBM technology as early as 1958, it only deployed its first nuclear-powered ballistic missile submarine in the early 1980s. The Type 092 Xia-class, however, is only known to have been deployed on a single patrol in Chinese waters in 1987 and to an exercise in 2000. It has remained at pier the rest of the time as engineers made repeated refits in an effort to overcome it’s noisy and radiation-leaking reactor. Furthermore, the Xia’s first-generation JL-1 ballistic missiles only had a range of 1,500 miles, limiting them realistically to attacks on nearby Vladivostok or Japan, and were likely never deployed operationally.

However, in the early 2000s, China began building the successor to the Xia in the Bohai shipyards in Liaoning province. In 2006, the photos emerged of a huge new submarine a third longer than a football field designated the Type 094 or Jin-class. This vessel’s displacement of over eleven thousand tons submerged made it the largest Chinese submarine to date, though the Jin remains smaller than Ohio and Borei class operated by the U.S. and Russia. Though official specifications are mostly lacking, some sources claim its crew of 120 can stay underwater for seventy days to ninety days, and that it has a submerged speed exceeding twenty-six knots (thirty miles per hour).

While the Type 094 packs six 533-millimeter torpedo tubes to engage enemy attack submarines and warships if necessary, its primary armament comes in the form of its twelve thirteen-meter tall vertical-launch missile tubes situated in a hump to the rear of its sail. These carry second-generation Juan Lung-2 (“Big Wave”) missiles derived from the land-based DF-31, boosted by twelve three-stage solid fuel rockets. Each JL-2 can carry between three to eight independent reentry vehicles (MIRV) which can separate to hit different targets, or a single warhead with a yield as high as one megaton. While some early JL-2 tests met with failure, the weapon has been successfully test-fired from Type 094 submarines in 2009, 2012 and 2015.

The Big Wave 2s are estimated to have a range of five thousand miles, which is not quite satisfactory from the People’s Liberation Army Navy (PLAN) perspective. During the Cold War, the Soviet Union preferred to keep its ballistic missile submarines in ‘bastions’ closer to well-defended home waters so that surface ships and aircraft could fend away NATO sub-hunters. (The U.S. Navy, by contrast, prefers to spread its submarines out across the globe.) Beijing could make its littoral waters very dangerous for enemy sub hunters, but a Jin-class submarine would have to swim hundreds of miles eastward into the Pacific if it wished to strike targets in the U.S. East Coast. That would mean exposing itself much more to opposing sub-hunters, which range from small sub-chasers, helicopters and enemy attack submarines, to large destroyers and airliner-based P-8 Poseidon patrol planes.

This is particularly problematic because the Jin-class submarine is estimated to be significantly noisier than its American or Russian counterparts. One study claims the Jin-class has an acoustic signature of 120 decibels (an earlier Office of Naval Intelligence report claims 140), compared to 95 for American Virginia-class attack submarines—while oceanic background sound (which admittedly is highly variable) is estimated at being an average of 90 decibels. Because of the non-linear scaling of decibels, this means the Type 094 is more than two orders of magnitude noisier than modern U.S. submarine, leaving it significantly less survivable.

Reportedly, China has also lagged behind in quieting and submarine nuclear propulsion technology as it has not been a priority and lacks significant overlap with civilian technologies. According to an article by Christian Conroy, specific issues with the Type 94’s acoustic signature may come from its humpbacked missile compartment and missile tube flood hatches. Conroy also argues that the JL-2 SLBMs would be highly vulnerable to interception by U.S. Navy SM-3 Block IIA anti-ballistic missiles mounted on cruisers and some destroyers, a conclusion shared in a detailed study by one Chinese analyst.

Another technical challenge for China’s submarine-based deterrence is likely command-and-control. To order submerged submarines to launch a nuclear strike, the national command authority must transmit a message either through huge Very Low Frequency or Extremely Low-Frequency radio systems that can deliver simple messages that can penetrate deep underwater. To keep in touch with its boomers, the United States maintains a small fleet of E-6B Mercury aircraft equipped with five-mile-long VLF trailing antennas, at least one of which remain airborne 24/7 in case the nuclear submarine force must be activated. China is not known to have a comparable airborne communication apparatus but does have colossal ground-based Very Low-Frequency radios.

Because of China’s policy of storing nuclear warheads separately from the missiles to avoid accidental or unauthorized launch, it also remains unconfirmed whether the Type 094s have ever deployed for patrols with nuclear warheads onboard; some experts even argue they probably did not. Of course, nuclear-armed patrols could be dispatched if tensions rise, but it is possible Beijing may be uncomfortable maintaining nuclear assets persistently at sea.

The PLAN currently has in service four Type 094 submarines named Long March 9 through 12 after Mao’s famous retreat across China begun in 1934—with a fifth under construction and plans to build three more. The third and fourth Jin class vessels are improved Type 094A boats first photographed in 2016. These feature a taller missile compartment which launches JL-2A missiles with an improved striking distance of 6,500 miles—making strikes on the U.S. West Coast possible without venturing far from Chinese ports. The 094A is also thought to be quieter and features a curvier, windowless conning tower and an additional towed sonar array to give it better advance warning of hostile submarines.

Satellite intelligence suggests the Type 094s may be based at Longpo Naval Base on Hainan Island in the South China Sea. China’s expanding network of militarized island bases—and artificially created islands—in the South China Sea could therefore even serve as a useful ‘bastion’ in the southwestern Pacific Ocean in which the Type 094s could safely operate. However, chokepoints defined by undersea geography and the presence of America’s island bases and undersea surveillance systems still would make it difficult for a Jin-class submarine to penetrate deep into the Pacific Ocean undetected.

Ultimately, the Jin-class must be recognized as a beginning point as Chinese engineers attempt to achieve a level of comparable acoustic stealth to American and Russian submarine designs. Reportedly, a new, larger Type 096 ballistic missile sub is under development, as well as JL-3 missiles with a purported 7,500-mile range. The underwater battlefield will also likely become even more contested as submarine drones and autonomous vehicles, and new satellite-based sensors are introduced over time. One can only hope, however, that waging undersea wars will continue to remain a hypothetical exercise in the decades to come.