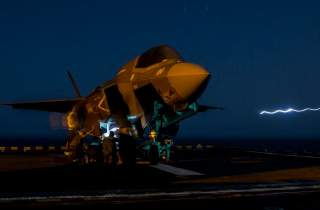 Rim of the Pacific (RIMPAC) 2018, the world’s largest international maritime exercise concluded on 2 August, following over a month of rigorous training events conducted off Hawaii and California. This year’s RIMPAC marked the 26th in the series that began in 1971. Twenty-five nations, forty-six surface ships, five submarines, and more than two hundred aircraft and twenty-five thousand personnel—including seventeen Marine and Army contingents participated in the biennial exercise. Participating forces exercised a wide range of maritime capabilities, ranging from disaster relief and maritime security operations to sea control and advanced war fighting.

Now let’s consider RIMPAC 2020. Building on the successes of RIMPAC 2018 and leveraging the changing political conditions in the Indo-Pacific highlighted during the 2017 and 2018 Shangri-La Dialogues, and in line with the new muscular National Security and Defense Strategies, serious consideration should be given to conducting RIMPAC 2020 in the South China Sea (SCS).

If so, the bold trifecta in strategic effects—pushing back against China’s unilateral expansionism in the strategic waterway, reinforcing the legal standing of the 2016 International Arbitral Tribunal ruling that invalidated Beijing’s Nine-Dash Line claims, and underscoring the universal importance of rule of law and compliance with global norms—will demonstrate that the United States and like-minded nations are willing to stand up for their national interests and shared values.

The expansive and deep-watered SCS, stretching from the Malacca Straits to the Taiwan Strait, offers a diverse tactical environment to accommodate a large fleet of participating ships, submarines and aircraft. And it allows for a realistic and complex maritime training regimen that includes disaster relief; amphibious operations; gunnery, missile, anti-submarine and air defense exercises; counter-piracy operations; mine clearing; and diving and salvage operations.

Importantly, for high-end warfighting like amphibious operations, live-fire training, and ship-sinking exercises (SINKEX), there is plenty of open water and airspace in the SCS; coastlines and islands along Vietnam, Philippines, Brunei, and Malaysia; and training areas and weapon ranges in Australia and the Philippines.

The U.S. Navy maintains a headquarters staff in Singapore—Commander, Logistics Group Western Pacific (CLWP). The command operates under Japan-based Commander, U.S. Seventh Fleet (C7F) with a mission to provide logistics and maintenance to the fleet, and to conduct a range of Theater Security Cooperation activities in Southeast Asia. Along with C7F, CLWP can augment planning efforts led by Commander, U.S. Pacific Fleet, the exercise sponsor of RIMPAC.

In addition to encouraging better Chinese behavior, holding RIMPAC 2020 in the SCS can also:

(1) Blunt Beijing’s wide-ranging efforts to dominate the strategic waterway. These actions include expanding administrative control through further expansion and militarization of its seven military outposts in the Spratly Islands; possible plans to establish more military outposts at Scarborough Shoal, James Shoal, Vanguard Bank and Macclesfield Bank; the permanent stationing of a search-and-rescue vessel at Subi Reef; possible introduction of floating nuclear power plants and launch of a constellation of satellites to monitor (and control) commercial shipping; establishment of its own version of RIMPAC in the SCS. And most recently, the manipulation of the draft Association of Southeast Asian Nations (ASEAN) Code of Conduct through language that excludes non-ASEAN states from the SCS, regulates military activities in the SCS, and gives Beijing the authority to veto military exercises between ASEAN members and foreign powers from outside the region.

(2) Encourage freedom of navigation operations (FONOPS) to challenge excessive maritime claims by other nations with shared interests in global norms. Other SCS claimants (Vietnam, Philippines, Brunei, Malaysia, Indonesia, Taiwan), regional nations (Australia, New Zealand, Japan, South Korea, India), and outside powers (United Kingdom, France, Germany) may feel more inclined to do FONOPS—and other related activities, both military and economic, in the SCS region—either individually or jointly if they believe America is serious and they are part of a collective long-term international effort to uphold the rule of law.

(3) Set the conditions for more maritime exercises like Talisman Saber and Malabar to be conducted in the international waters of the SCS, and effectively push back on the Chinese legal position that coastal states have the right under the United Nations Convention on the Law of the Sea (UNCLOS) to regulate both economic and foreign military activities in their exclusive economic zones (EEZ) despite China itself doing exactly the opposite.

Like RIMPAC 2012, 2014, 2016 and 2018, China dispatched a spy ship into the United States’ EEZ and Washington did not object to the Chinese ship’s presence—which is not Beijing’s response when Washington and other navies conduct similar activities in China’s (claimed) EEZ. Instead, more often than not China admonishes the offending nation(s) for violating its claimed territorial sovereignty and sometimes even harasses the military units themselves.

While not unprecedented and not in violation of international law, the spy ship’s deployment into a foreign EEZ nonetheless reminds the world that China is a rising (some would say, ‘already risen’) power that is willing to fully leverage its interpretation of maritime rights under the UNCLOS. But this underscores Beijing’s selectively choosing the parts of UNCLOS that it likes and ignoring or reinterpreting the parts that it does not like or finds inconvenient. All in all, Beijing has a clear sense of its own maritime rights, but it does not necessarily tolerate and accept the same rights for others.

(4) Provide an opening to re-invite China provided it complies with RIMPAC standing rules of engagement and code of behavior, particularly not bringing along spy ships. If Beijing accepts the invitation, it implicitly acknowledges the International Arbitral Tribunal’s ruling in 2016 was not a “scrap of paper” and also accepts the U.S. legal position that military activities are a recognized lawful activity on the high seas and within the EEZ under customary international law and are preserved under Article 58 of UNCLOS. The international community by and large agrees with Washington—only twenty-seven states concur with Beijing’s interpretation of UNCLOS, while the majority of states (over one hundred, including all permanent United Nations Security Council members other than China) hold Washington’s position.

Therefore, if Beijing does not accept the invitation, it further undermines its regional and global standing and accentuates the growing perception amongst its neighbors that it is a destabilizing force in the region.

(5) Provide an opening to invite Taiwan since it is also a SCS claimant with vested interests in the strategic waterway.

(6) Advance the long-sought maritime domain awareness initiative for the SCS, provide an economic boost for the local host nations, and deter the piracy that still plagues parts of the SCS.

Above all, convincing countries to participate. Beijing will howl—declaring the proposed exercise as a provocative challenge to China’s claim of undisputed sovereignty over the SCS, and seeking to contain China’s benevolent rise. Beijing will dissuade and coerce prospective participants. Those that do not cave in will likely face political and economic retribution and military intimidation.

Thus, serious American diplomacy will be needed to convince countries in and outside the region to participate. The immense logistical undertakings to execute the exercise and mitigating the real operational security concerns and potential environmental impacts are relatively minor challenges by comparison.

Admittedly, holding RIMPAC 2020 in the SCS is a bold move, to put it mildly. In baseball terms it’s “swinging for the fences.” But something like this is needed when it’s the bottom of the 7th and the United States and the Free-World are down by several runs against China.

The United States spent over forty years accommodating, and indeed, building up China. All was done in the expectation (and false hope) that Beijing would liberalize and adjust to global norms of behavior. Instead, China has become militarily powerful enough to threaten its neighbors and even the United States. And besides being economically rapacious, it’s increasingly repressive and seeks to create its own version of a world order—under Chinese rules—with the veiled threat “do what we say or else.”

The Trump administration is the first U.S. administration to seriously challenge Beijing. And ironically, these efforts enjoy bipartisan support in the U.S. Congress. And even the U.S. and Western industry is starting to realize that hopes of riches from the Chinese market just might be illusory.

That being said, holding RIMPAC 2020 in the SCS will only work if it is part of a much broader U.S.-led multinational effort that includes economic, diplomatic, and informational “fronts” to assert the “rule of law” and national interests. If it’s just RIMPAC 2020 and nothing else, few if any countries will join; rightfully fearing that if they do, afterwards they’ll be alone to face a really angry China.