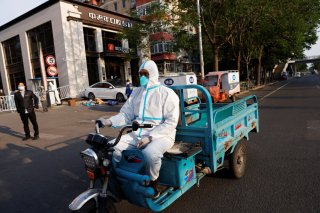 A Reuters poll revealed last week that the country’s exports in April had grown 3.9 percent from April 2021, roughly matching early estimates that had projected an increase of 3.2 percent per year. However, the 3.9 percent level, while regarded as an excellent number in any Western economy, still marks China’s slowest growth rate since the depths of the pandemic in mid-2020. The country’s imports remained more or less unchanged from the previous April, marking a slight improvement from March’s 0.1 percent decline.

Similarly, China’s estimated April trade surplus remains $51.1 billion, a slight improvement from the projected $50.6 billion but essentially unchanged. This number is also slightly up from March 2022, which saw a $47.4 billion monthly trade surplus.

While all these signs are positive indicators for the Chinese economy, Beijing has increasingly grappled with large COVID-19 outbreaks in recent months, including one in Shanghai that has resulted in considerable anger toward the Chinese authorities. Beijing has defended its strict COVID-19 policies in the past, arguing that the country’s zero COVID policy allowed it to remain more or less functioning throughout the second half of 2020, when the pandemic shut down much of the rest of the world. The government indicated in early May that the zero COVID strategy would persist in the interest of protecting the country’s elderly, who have a low vaccination rate. However, continued lockdowns could risk the anger of Chinese citizens forced to remain in their homes for days or weeks at a time.

Russia’s invasion of Ukraine has also led to economic disruption within China, as Russia has historically been one of its largest trading partners. Western sanctions on Russian banks have hindered the Kremlin's ability to pay for its imports from Beijing since the outset of the war. Moreover, fears of running afoul of U.S. sanctions have constrained Chinese attempts to restore payment systems.

The war has also coincided with a broader decrease in Chinese domestic consumption and the continued failure of its sluggish real estate sector to make progress following a downturn last year.