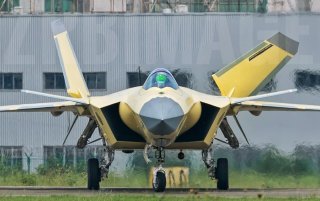 Chinese stealth fighter jets, submarine-hunting surveillance planes, and early warning aircraft have been on close-in patrols near Taiwan as part of what’s being called “real combat” preparations intended to set the stage for an invasion of the island.

“The operations, aimed at gathering intelligence on the forces of Taiwan, the US and Japan including their submarine activities, troop deployments, and military facility situations, will prepare the PLA for a possible future battle,” the paper states.

An article says that a J-20 flew just minutes away from being able to strike and destroy Taiwanese and U.S. aircraft and 500km off the Taiwan coast, adding that J-20s could attack above Taiwan in a matter of 15 to 20 minutes.

“The J-20 holds a generation gap advantage over all of Taiwan's warplanes, and its involvement in a potential PLA operation on Taiwan would result in a one-sided PLA victory in the air,” the paper writes.

Several articles specifically state that Chinese offensive operations could also defeat U.S. and Japanese defenses should that be necessary, in part by virtue of having used the Y-8 to maintain a track on U.S. and Japanese submarines.

“The Y-8 anti-submarine warfare aircraft is apparently equipped with an air-to-surface search radar to conduct reconnaissance on warships, and a magnetic anomaly detection tube and sonobuoys to search for submarines,” the paper states.  Alongside the Y-8, the PLA also deployed the Y-9 reconnaissance aircraft to, as the paper described it, “gather intelligence on hostile troops, the situation in hostile bases, ports and airfields,” to find patterns.

What does the mention of “real combat” mean? A possible escalation in war preparations?

Taiwan and the U.S. have long harbored concerns that China’s threat of invasion was quite credible. The character of these operations, and the way they are being described, does seem to suggest a decided escalation. While the rhetoric of this kind may not be unusual, the combination of these kinds of surveillance missions along with attack threat possibilities from a J-20 does seem to present a serious provocation.

Several things come to mind, such as the prospect of nearby F-35B-equipped U.S. amphibious carriers capable of launching aircraft to challenge the J-20 and Taiwanese air defenses could at very least threaten Chinese surveillance planes.

It might also be important to bear in mind that the U.S. regularly maintains bomber task forces, training operations and surveillance patrols in the region, increasing the possibility that U.S. and Taiwanese defenses might detect approaching Chinese surveillance aircraft and make rapid adjustments.