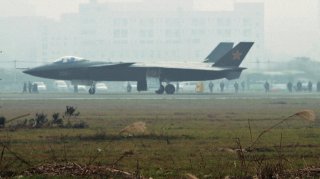 Chinese military aircraft have again entered Taiwan’s air space in an overt attempt to gather intelligence, conduct reconnaissance missions, and intercept U.S planes in the region.

A report in the Chinese-government-backed Global Times states the event marks the eighth time People Liberation Army forces have sent aircraft into Taiwan’s southwestern airspace. The report is clear to explain that the missions are increasing in frequency for training purposes and the decided intention to track and intercept U.S. surveillance aircraft in the region.

These increased flights are conducted “with the aim of gathering military information from Taiwan and suppressing potential U.S. and Japanese reinforcements coming from the Miyako Strait and Bashi Channel,” the paper writes. The report also specifies that Chinese operations are intended to keep watch over Taiwan’s naval and military bases in the Southwestern part of the country. The aircraft used in this most recent operation was not specified in the report, however, recent activities have included Chinese J-10, J-11, and Su-30 fighter jets and Y-8 “special mission aircraft.”

While the moves are by no means surprising, they do come at a time when the U.S. is increasing patrols, routine flight missions, reconnaissance operations, and joint-allied training throughout the Pacific. Regarding the longer term, the U.S. Congressional leadership is moving quickly to massively uptick funding for an increased U.S. military presence in the region. Specifically, a proposal introduced by Rep. Mac Thornberry, R-Texas, ranking member of the House Armed Services Committee, called the Indo-Pacific Initiative, is requesting a $6 billion plus-up in funding for U.S. military activities in the Pacific theater.

Added to the increasing tensions, a Global Times report cites an abstract of China’s 2020 research report on the U.S. military presence in Asia, stating that the U.S. operates 60 percent of its Navy fleet in Asia, 55 percent of its Army and two-thirds of its Marine Corps. “With 85,000 forward-deployed soldiers and a large amount of high-tech and new weaponry, the U.S. military has maintained its absolute supremacy in the Asia-Pacific over the years,” the report states.

Strategically speaking, a mutual U.S.-China force structure and operational increase in the vicinity is reminiscent of a Cold War conceptual framework, something likely to be costly and anxiety-producing for both countries. Interestingly, however, a U.S. military build up in the region brings the prospect of massively increasing the possibility for peace and stability in the area, by virtue of increasing deterrence. After all, the irony of military build ups, as seen by Congressional proponents and some historians, is to forward position weapons for the specific purpose of not having to use them in war. While mutual de-escalation would of course be preferable, there is also arguably some merit to the idea of peace through strength.