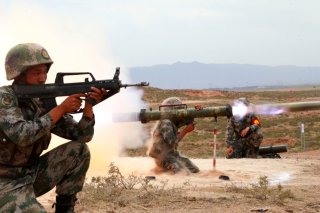 However, while the phrasing and language of joint warfare operations may sound ominous, it is far from clear to what actual extent Chinese military forces are capable of “joint” multi-service operations. Such an ability, which the U.S. military has also been laboring to attain, is technologically complex and dependent upon an ability to align data and messaging formats, connect separately engineered communications nodes across multiple domains and vast distances, and process shared information at relevant speeds. The extent to which China can do this might well indicate just how well the US military would perform in a major warfare engagement. Should the United States be well ahead of China in this capacity, such a technological imbalance would favor success for the United States in various combat scenarios.

“Fully loaded with live ammunition, several bombers and fighter bombers of the Air Force took off one by one, entered combat formations, and launched standoff, saturation strike exercises with various types of precision munitions,” the paper says.

The Chinese paper suggested that the PLA was also mirroring or potentially even copying a U.S. military tactical focus on multi-domain operations, reporting that its air assets were accompanied by its army’s “long-range rocket artillery and the Rocket Force’s conventional missiles.”

While this may sound significant, the PLA’s multi-domain attack capabilities will be highly dependent on its ability to “network” information in near real-time and connect target data specifics between bomber aircraft and ground-based missile launchers. This is something the United States is making rapid progress on through its air-land-sea multi-domain task forces in the Pacific and joint-service program, the Joint All Domain Command and Control (JADC2).

It is also unclear how the Chinese PLA has improved in areas of multi-transport layer interoperability, cross-domain networking, and common protocol to allow otherwise disparate information systems to security exchange information.

While the Chinese report did not include specific kinds of communications technologies, it did suggest that the PLA’s bombers and fighters were connected with early warning surveillance planes and electronic warfare-capable planes and warships at sea. Should this be true, and the PLA can reliably send time-critical data between its bombers, surveillance planes, surface warships, and land weapons systems, it would suggest a concerning and potentially formidable threat. However, while so much is unknown regarding the PLA’s capacities, the United States has made proven gains in its multi-domain, joint-force networking capabilities. For instance, the Army’s fast-evolving Integrated Air and Missile Defense Battle Command System (IBCS), which includes ground-based networking radar and modernized missile defense systems, have demonstrated an ability to share information with Air Force F-35 stealth fighters. ICBS developers from Northrop Grumman, the Navy, and Army are also exploring the prospect of extending the network to incorporate the Navy’s surface-ship Aegis combat system.