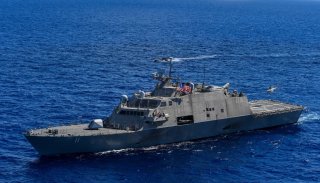 The U.S. Navy is moving to expand its multidomain operational capacity by experimenting with new methods of deploying ship-launched drones from both land and sea.

As part of this comprehensive expansion into more multi-domain activity, something which has included the use of Multi-Domain Task Forces in key hotspots around the world such as the Pacific, the individual services have been working to expand the operational envelope of their weapons platforms and technologies. For example, the Navy recently achieved a breakthrough milestone with its ship-launched MQ-8C Fire Scout drone by transitioning from ship-to-shore in a maritime environment.

“The MQ-8C Fire Scout participated in the Resolute Hunter exercise June 21-July 1, flying a total of 23 hours and proving the unmanned helicopter’s expeditionary use from land and across multiple ship classes,” a Naval Air Systems Command report said. “Resolute Hunter is a joint and coalition large force exercise focused on training personnel on battle management, command and control and intelligence, surveillance and reconnaissance,” the Navy story said.

“Fire Scout is the Navy’s only unmanned helicopter with the ability to deploy from a ship or land with ISR&T [Intelligence, Surveillance, Reconnaissance, and Targeting] at the extended range required for future warfighting,” Capt. Dennis Monagle, Fire Scout program manager, said in a report from Naval Air Systems Command. “The system is vital in expeditionary use for situational awareness and critical decision-making.”

This milestone, which introduces new multi-domain tactical advantages for amphibious warfare, is described by the Navy as the Fire Scout supporting Expeditionary Advanced Base Operations. During what the Navy identified as Resolute Hunter, a combat preparation exercise off the coast of California, the Fire Scout launched from a ground location in Point Mugu and used a “Portable Mission Control Station (MCS-P).”

“The portable MCS-P ground control station helps Fire Scout basing in austere locations on land, helipad operations in an advanced forward location, and logistics support from ship flight decks.With the flexible MCS-P, Fire Scout has the ability to land on another ship or an expeditionary shore site where a runway is not feasible,” the report says.

A multi-domain operational focus for the Navy’s Fire Scout makes sense for a lot of reasons, in large measure because the “C” variant continues to receive new upgrades including coastal countermine technologies, advanced maritime and land sensors, new radar, artificial intelligence-enabled computer processing at the point of collection, and newer kinds of networking applications for multi-domain missions.

For instance, a multi-domain-enabled Fire Scout could provide forward targeting for mines and enemy positions in support of an amphibious assault and then extend support into land areas as forces advance. Beyond this, a Fire Scout could operate in island areas or coastal regions, bringing a forward unmanned opportunity to surveil high-risk areas while manned vessels stayed at a safer stand-off distance in support of target identification or “island hopping” kinds of operations. Given this, a multi-domain capable Fire Scout, enabled by a mobile mission command center, would be well suited for operations in the Pacific, an area which includes many islands and coastal areas.