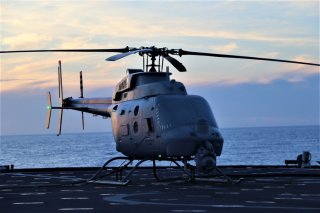 As the U.S. Navy retires its MQ-8B Fire Scout drone, the service is expanding the mission scope and deployment plans for its follow-on MQ-8C variant.

While the MQ-8B has performed well on surveillance and mine-hunting missions, the new MQ-8C variant has a host of advantages such as longer dwell time over targets, expanded intelligence, surveillance, and reconnaissance (ISR) capacities, and greater endurance. The MQ-8B Fire Scout, for example, operates with four-to-five hours of “on station” time, whereas the C variant can operate from ten to twelve hours, a senior Navy weapons developer told The National Interest. This development is significant for several key reasons, as the drone is positioned to further transition beyond its role with Littoral Combat Ship (LCS) mission packages. The U.S. Navy’s move to decommission a large number of LCS ships is pushing the service to expand the type of ships the Fire Scout can perform missions on.

As a result, it seems that the Fire Scout C may be uniquely positioned to support both amphibious operations and anti-submarine warfare. The drone has already gone through a fit check on the USS Anchorage, an amphibious transport dock, and is concurrently being assessed for integration into a number of different maritime platforms such as amphibious assault ships, the service’s growing fleet of expeditionary sea bases, and even the first Constellation-class frigate.

“Fire Scout really is not tethered to one particular ship, and in this case, the LCS,  so we've been looking at other ship classes. ESBs expeditionary staging bases is one that we've actually done some flight testing with the Navy,” Lance Eischeid, director, Fire Scout program, Northrop Grumman, told The National Interest in an interview.

The rapid expansion of Fire Scout mission concepts aligns with current U.S. Navy and industry efforts to ease the “integration” of the LCS onto different platforms through the development of deployable and high-tech maritime command and control stations. This increases operational flexibility and improves the speed at which a Fire Scout can operate from a new ship.

“We've taken a couple of different approaches, one of which has been ensuring that we have a flexible and portable control station. On the LCS, the control station is integrated into the ship. The Navy has what they call a mobile control station, but it's a pretty big Conex box. I wouldn't call it very portable,” Eischeid said. “In recent years, Northrop Grumman has developed our MCS- X Mission Control Station Expeditionary. Very recently, the Navy has similarly developed a MCS-Portable MCSP. Both of these kind of do the same thing. They take all the functionality of the integrated control station and they repackage it into Conex boxes that can be quickly packed up and redeployed to another ship or to an island or to another site,” Eischeid added.