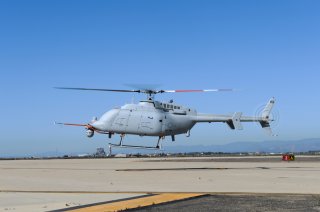 While the U.S. Navy has not funded any specific efforts to arm or upgrade its MQ-8C Fire Scout drone, a previous service analysis of the platform suggests that it’s a possibility.

“We did complete a study, and our analysis showed we have a technical way forward to add weapons to the platform. At the moment, there are no funded efforts to do this,”  said Capt. Eric Soderberg, the MQ-8 Fire Scout program manager.

After many years of testing and development, the Navy’s MQ-8C is now deployed on the USS Milwaukee Littoral Combat Ship in the region of U.S. Southern Command, marking a milestone for the helicopter-like unmanned reconnaissance platform.

An armed Fire Scout, by extension, could integrate surveillance and targeting with precise weapons attacks. Of course, humans would be making decisions regarding the use of lethal force. However, if an enemy vessel moving along the surface was detected by a Fire Scout, a Navy Commander could then authorize the Fire Scout to employ a rocket, missile, or gun of some kind. The surveillance, targeting, and actual attack could be performed autonomously once a human decision-maker authorized the use of lethal force. This can not only greatly decrease latency when it comes to quickly pairing sensors to shooters, but it can also greatly expand the offensive strike envelope for the drone’s host ship. A Fire Scout would not need to relay target data to an armed manned platform in order to attack, something that could be useful if the ship was not in the immediate vicinity. Clearly, this would greatly assist the Navy’s efforts to target distant threats.

The Navy’s ongoing effort to integrate the “LINK 16” datalink could allow the Fire Scout to operate as a key combat “node” within a larger meshed network of platforms. Should this come to fruition, Soderberg explained, the “Fire Scout will be able to share its targeting data not just to the controlling ship but disperse it more broadly.”

“If you wanted real-time updates for a weapon, LINK 16 would be the one whose task is to find and fix targets at a range that a navy ship could not do otherwise,” Soderberg explained.

This kind of paradigm-changing information exchange could, for instance, enable an armed MH-60S helicopter to quickly fire missiles at a target identified in real-time by a Fire Scout. With LINK 16, an armed Fire Scout could fire upon targets sent from another surveillance asset after being directed to by a human decision-maker. Should an enemy submarine surface for just a few minutes, there might be a small window of time to engage and destroy the boat before it quickly disappears. If a Fire Scout was armed, however, a human might be able to authorize the use of force quickly enough for the Fire Scout to strike and destroy the submarine.