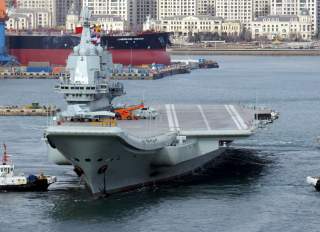 The People's Liberation Army Navy commissioned its first aircraft carrier Liaoning, a refurbished former Ukrainian vessel, in September 2012. "China’s first aircraft carrier signaled a new age for PLAN aviation, which is now evolving from an almost exclu­sively land-based force to one with a sea-based component," the DIA explained in its report.

With the 999-feet-long Liaoning, China "join­[ed] the small group of countries that have an aircraft carrier," according to the DIA. "Since that time, the PLAN has fol­lowed the long and difficult path of learning to operate fixed-wing aircraft from a carrier."

"The first launches and recoveries of J-15 fighter aircraft occurred in November 2012, with additional testing and training in early July 2013. With the first landing complete, China became only the fifth country in the world to have conventional takeoff and landing fighters aboard an aircraft carrier.

"In 2017, the Lia­oning concluded its second deployment to the South China Sea for training—its first with embarked J-15 fighters—and conducted its first port visit to Hong Kong."

The J-15 is a clone of Russia's Su-33 naval fighter. Outwardly, the fighter has a lot in common with U.S., French and British carrier planes. "The J-15 has folding wings, strengthened landing gear, a tailhook under a shortened tail stinger, two-piece slotted flaps, canards and a retractable inflight-refueling probe on the left side of the nose."

To compensate for the lack of a large AEW plane, the PLAN acquired Z-18J and Ka-31 helicopters that carry air-surveillance radars. The helicopters "provide the PLAN a service­able sea-based AEW capability to help fill that critical gap until newer catapult-equipped air­craft carriers capable of operating fixed-wing AEW aircraft enter service."

In 2017 China launched its second carrier Shandong. The vessel, which the DIA predicted could enter front-line service as early as 2019, is roughly similar to Liaoning and suffers the same limitations. "Like the Liaoning, the ship lacks cat­apult capabilities and has a smaller flight deck than U.S. carriers."

Future Chinese carriers could remedy Liaoning's and Shandong's defects, the DIA explained. "The PLAN [was] expected to begin construction in 2018 on its first cat­apult-capable carrier, which will enable addi­tional fighter aircraft, fixed-wing early warning aircraft, and more rapid flight operations."

But don't expect any of China's first three flattops to venture too far from home. "The primary purpose of this first domestic aircraft carrier will be to serve a regional defense mis­sion," the DIA claimed. "Beijing probably also will use the carrier to project power throughout the South China Sea and possibly into the Indian Ocean."

"Once operational, the new Renhai class guided-missile cruiser, of which several are currently under construction, will be one of the most advanced and powerful ships in the world, boasting a large array of advanced-capability weapons and sensors developed domestically," according to the DIA.

It could be years or even decades before the PLAN is comfortable deploying carriers to the far ends of Earth. But the Chinese fleet is making progress toward that eventuality.