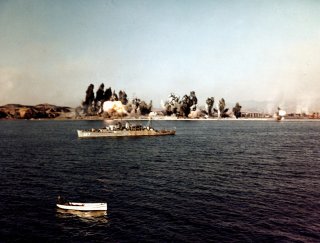 On June 27, 2017, South Korean president Moon Jae-in laid a wreath at a memorial in Quantico, Virginia commemorating the frozen Battle of Changjin Lake. The visit by the newly elected leader was of more than just diplomatic significance: Moon’s own mother, owed her life to a huge but little remembered evacuation of North Koreans conducted by the U.S. Navy at Hungnam, North Korea. The event has been commemorated in many memorials and a wrenching sequence in the film Ode to My Father.

Until the U.S. evacuation from Afghanistan this summer, this was estimated to be the largest wartime evacuation of civilians undertaken by the U.S. military, and it dramatically affected the lives of at least a million Koreans today.

Let’s rewind back to October 1950 in the Korean War. The United Nations forces had not only repelled North Korea’s invasion of South Korea but were well on their way to capturing all of North Korea in the bargain. That involved appointing new civilian officials sympathetic to South Korea’s government in North Korean communities.

But then Chinese armies intervened, launching a massive counterattack that halted and enveloped UN forces, late in November driving the powerful X Corps commanded by Major General Edward Almond into a desperate retreat amidst blistering cold winter weather in the Battle of Chosin Reservoir (AKA Changjin Lake.)

Unable to extricate itself by land, X Corps was driven back against North Korea’s eastern coastline. On December 8, General Douglas MacArthur instructed Almond he would have to evacuate the nearly 100,000 U.S. and South Korean troops by sea at the port of Hungnam, 113 miles northeast of Pyongyang. And he would have to take all the vehicles, supplies, and heavy weapons too, so X Corps could jump right back in the fight. Already two earlier evacuations extracted 3,800 South Korean troops and 7,000 civilians out of Wonsan and 16,500 ROK soldiers out of Songjin.

X Corps consisted of three divisions: the battle-worn 7th Infantry and 1st Marine divisions, and the freshly arrived 3rd Infantry which had acted so far only as a rearguard at Wonsan. There were also thousands of Corps support troops, vehicles, and artillery systems. Additionally, Almond had to evacuate South Korea’s 3rd and Capital divisions and the Royal Marines of No. 41 Commando battalion.

Almond’s staff conceived of a three-phase evacuation plan focusing on extracting one division at a time. Initially, all three divisions would man a defensive perimeter well outside Hungnam (See this map). Then as each division evacuated, the defending troops would fall back to a tighter defensive ring, with the 3rd serving as the final rearguard.

But the first order of business was making sure X Corps actually made it to Hungnam. So Almond had the 3rd Infantry assemble Task Force Dog (including a battalion of infantry, armored artillery, and A Company of the 73rd Engineer Battalion) to secure the mountainous escape route.

The task force quickly erected bridges at Funchilin Pass on December 9 through which the X Corps unit began rolling across at 2:40 AM the following morning. A Chinese force briefly cut the vital artery near Suchim’dong but was driven off by a counterattack which cost the life of a U.S. company commander.

But X Corps didn’t come alone. Tens of thousands of North Koreans who had cooperated with South Korea’s government or objected to North Korea’s began streaming into the port, fearing violent retribution from Communist forces. This was well-founded, as both sides massacred tens of thousands of civilians on the basis of their political sympathies during the war.

Almond initially expected to evacuate only around 25,000 officials and their families affiliated with South Korea. But as more and more desperate refugees arrived, he came under pressure from Hyun Bong-Hak—a U.S.-educated advisor in his Civil Affairs section—who insisted he had to take the North Korean refugees into account.

Initially reticent, Almond changed his mind. Army captain Alexander Haig, the future Secretary of State recalled that Almond told him “We can’t leave those people. Take care of that.”

Order at the Beach, Skirmishes at the Front

Given the presence of the Chinese 27th Army around the perimeter, there was no telling how much time X Corps had to make its escape.

At the beach, a Marine colonel named Edward Forney, a combat veteran of the Solomon Islands campaign in World War II, coordinated the embarkation process. He was assisted by the 2nd Engineer Special Brigades, and over 1,000 contracted Japanese stevedores.

Meanwhile, on the command ship USS Mount McKinley, Admiral James Doyle coordinated the entry and exit of shipping and planned air and naval gunfire support. In all, 125 ships participated in the evacuation, making multiple runs.

Every possible asset and method was used to loosen the logistical bottleneck. For example, double-banking allowed up to eleven ships to be crammed at the port’s seven berths.

Another 3,600 soldiers and refugees (including South Korea’s 1st Marine Regiment) and 196 vehicles were also flown out by 112 Air Force and 10 Marine cargo flights at the airport at Yonpo, seven miles southwest of Hungnam. The air bridge, along with the hospital ship Consolation, was particularly useful for evacuating wounded soldiers but had to be abandoned on December 17 as the defensive perimeter contracted.

Trains were also activated to ferry refugees from outlying suburbs to the beaches for embarkation. But the winter conditions were strenuous for the waiting refugees. Doyle later wrote in the journal Proceedings “The temperatures never got above freezing and they suffered terribly. Colonel Forney maintained warming fires along the beach and I had rice delivered from the ships’ stores. It was only enough for survival.”

Fortunately, Communist forces exerted only moderate pressure on the beachhead despite it being a seemingly tempting target.

This was for several reasons. Chinese troops had suffered immense casualties at Chosin and needed time to rest and replenish. And X Corps’s collapsing perimeter around Hungnam disrupted their tactical rhythm of launching smaller probing attacks to reconnoiter UN positions prior to mounting a larger regimental-scale attack. Basically, the UN troops kept falling back before large-scale attacks could be mounted.

Finally, ‘modest pressure’ by the standards of the Korean War could still prove quite intense for those at the pointy end. For example, the war diary of the Puerto Rican 65th Infantry Regiment, reports that on December 14 that a strong point at Oro-ri manned by Bravo company came under attack from artillery and between 200 and 400 Chinese soldiers at 1:30 AM. The company was forced to withdraw at 3:50 under covering fire from a tank platoon. At 8:30 Bravo and two supporting companies counterattacked, recapturing the hill at noon. One-third of the Bravo company’s soldiers were killed or wounded in the action.

A South Korean nurse at the evacuation also told the New York Times the counter-battery fire from North Korean ships was hardly paltry: “We rushed through the cross-fire back and forth several times before we could catch a ship. The ground was strewn with people with their luggages who were killed.”

Nonetheless, the complex evacuation and retrograde movements relentlessly despite the shellfire crisscrossing overhead.

The battleship Missouri arrived and lobbed 162 huge 16” shells to cover wrap-up activities undertaken by Navy Underwater Demolition Team specialists and Army engineers, which included sabotaging port and railway facilities and rigging up to 650 tons of explosives and munitions and 200 drums of oil that couldn’t be transported. Even the pull chain of a toilet was boobytrapped with a landmine.

The last soldiers cleared the beach at 2:36 PM on AmTrac vehicles of the 1st Amphibious Tractor Battalion. As the last ships departed, the explosives was remotely detonated, creating a towering fireball (pictured here).

Informed of the evacuation’s success, President Harry Truman said, “I thank God for the success of the Hungnam operation. It is the best Christmas present I’ve ever had.”