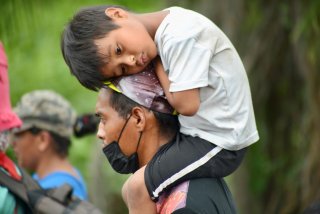 Rising temperatures, droughts, and extreme weather that are connected to climate change will likely lead to growing international tensions, according to new reports from U.S. intelligence agencies, the White House, and the Department of Defense.

“We assess that climate change will increasingly exacerbate risks to U.S. national security interests as the physical impacts increase and geopolitical tensions mount about how to respond to the challenge,” the National Intelligence Estimate writes, per the Office of the Director of National Intelligence.

“Intensifying physical effects will exacerbate geopolitical flashpoints, particularly after 2030, and key countries and regions will face increasing risks of instability and need for humanitarian assistance,” it continues.

The report also warned that “countries will try to defend their economies and seek advantage in developing new technology. Some nations may also resist the desire to act, with more than twenty countries relying on fossil fuels for greater than 50 percent of total export revenues,” according to BBC News.

The paper contends that “a decline in fossil fuel revenue would further strain Middle Eastern countries that are projected to face more intense climate effects.”

Water access could also be the focal point of potential problems. “In the Middle East and North Africa, about sixty percent of surface water resources cross boundaries. Pakistan and India have long-standing water issues. Meanwhile, the Mekong River basin could cause problems between China and Cambodia and Vietnam,” the news outlet notes.

The United Nations on Monday confirmed that greenhouse gas concentrations hit a record last year and that the world is “way off track” in its ongoing effort to curb rising temperatures. A report by the UN World Meteorological Organization (WMO) revealed that carbon dioxide levels climbed to 413.2 parts per million.

“We are way off track. We need to revisit our industrial, energy, and transport systems and whole way of life,” said WMO Secretary-General Petteri Taalas, adding that the global community needs a “dramatic increase” in commitments at the COP26 climate change conference that starts on Sunday.

According to the Lancet in its annual Countdown on Health and Climate Change, climate change will eventually trigger massive food shortages, deadly disasters, and disease outbreaks that could potentially dwarf the current death toll of the ongoing coronavirus pandemic.

“In 2020, a record-breaking twenty-two weather and climate disasters each caused over $1 billion in damage (e.g., structural, crop) in the U.S. with over $95 billion dollars in total losses. A record eleven hurricanes made landfall—seven as billion-dollar events,” the peer-reviewed medical journal writes.