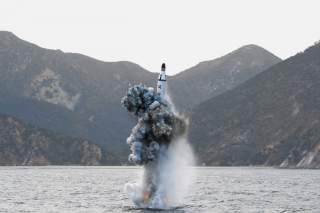 Image: North Korean leader Kim Jong Un guides on the spot the underwater test-fire of strategic submarine ballistic missile in this undated photo released by North Korea's Korean Central News Agency (KCNA) in Pyongyang on April 24, 2016. KCNA/via REUTERS. ATTENTION EDITORS - THIS IMAGE WAS PROVIDED BY A THIRD PARTY. EDITORIAL USE ONLY. REUTERS IS UNABLE TO INDEPENDENTLY VERIFY THIS IMAGE. SOUTH KOREA OUT. TPX IMAGES OF THE DAY​