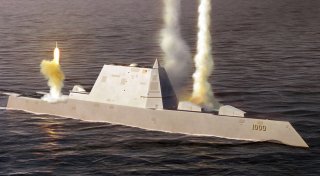 The U.S. Navy's Zumwalt-class, named after Elmo Zumwalt of Vietnam fame, has been an incredibly problematic class of ship.

The class was originally designed as a stealthy land-attack platform intended to support land operations, conduct anti-aircraft defense, and provide naval fire support. To fulfill that mission, the ships were designed from the outset around the Long Range Land Attack Projectile, a failed 155-millimeter naval artillery system.

The Zumwalt-class’ odd-looking bow and lines are a stealthy, low radar cross-section design intended to make them nearly invisible to enemy radar. Indeed, this may be one of the few things that the Zumwalts excel at. Despite being larger than the preceding Arleigh Burke-class destroyers, the Zumwalts have a lower radar cross-section and are harder to detect.

Stealth has come at a cost, however. The Zumwalt’s inverted bow design may be much less seaworthy than traditional hull designs. Some naval designers have speculated that during certain sea conditions, the design could lose stability on the water and capsize. Ultimately obscene cost overruns doomed the program, and Bath Iron Works built only a paltry three Zumwalts.

However, the class may finally see some usefulness.

According to reports, various members of the U.S. House of Representatives want the Navy to arm the class with the Conventional Prompt Strike hypersonic missile. To date, only some Virginia-class submarines and a few Ohio-class submarines are planned to be equipped with this new missile.

The missile is a Naval variant of a joint Navy-Army hypersonic boost-glide missile development project. In addition to the missile’s blisteringly high terminal velocity, it is also very maneuverable and therefore will be very difficult to defend against. They may be just the thing that the Zumwalts need.

Despite the Zumwalt class’ insanely high costs, they may be among the most survivable of the U.S. Navy’s platforms. Their stealth capabilities could allow them to get closer to targets on both land and sea than other Navy ships — and exchanging their useless Long Range Land Attack equipment for the Navy’s new hypersonic missile could be a great idea.

Still, the transition wouldn’t be as simple as swapping out the weapon system. The Zumwalt’s existing Mark 57 Vertical Launch System appears to be narrower in diameter than the Navy-Army Conventional Prompt Strike missile. A new launch system would have to be installed to give Zumwalts a launch capability.